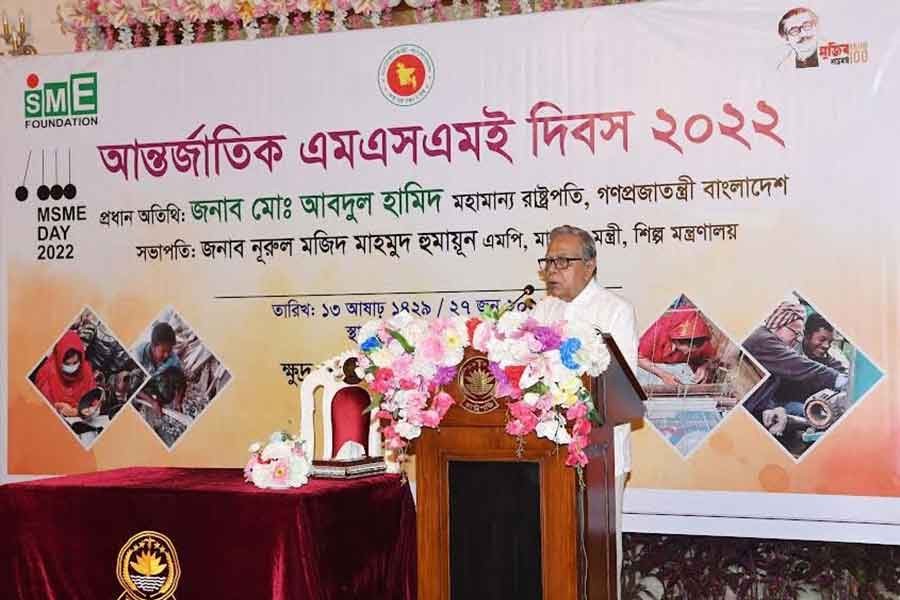 President M Abdul Hamid has called upon young people to become self-reliant by using their talents and innovative ideas without running after jobs.

"Today's educated young men and women run after jobs after completing their studies but it is absolutely impossible to arrange jobs for everyone . . . its only alternative way is to turn educated unemployed youths into entrepreneurs," the president virtually told a function at Agargaon in Dhaka on Monday evening.

Organised by the Ministry of Industries and the SME Foundation, President Hamid virtually joined the discussion of the Micro, Small, and Medium-sized Enterprises (MSME) Day 2022, reports BSS.

The facilities needed to become an entrepreneur are yet to be fully developed, especially in terms of getting a loan, he said, adding that the government has already taken several steps in this regard.

Abdul Hamid said Father of the Nation Bangabandhu Sheikh Mujibur Rahman had given special importance to the development of management of these large-scale industries by nationalising.

The trend of industrialisation in Bangladesh is moving forward in the light of Bangabandhu's economic philosophy, he observed.

Noting the importance of MSMEs as the driving force of the economy, the President said, "Through the development of the MSME sector, industrialisation, job creation, poverty alleviation, and balanced development are possible."

President Hamid said due to the industry-friendly policies and initiatives of the present government, Bangladesh has already achieved unprecedented development in industrialisation in the private sector.

He said in the last 13/14 years, the number of large and heavy industries, as well as the small and medium industries in the country, has increased at a significant rate, creating employment opportunities across the country as well as accelerating the overall economic and social progress.

Noting that there has been visible improvement and progress in other indicators of the economy as well, he said the construction of the Padma Bridge has been made possible with the government's own funds due to the strong steps taken by Prime Minister Sheikh Hasina's timely decisions.

He said a large number of women in the country are now concentrating on business by setting up small and medium enterprises which are having a positive impact on women's employment, empowerment and socio-economic development.

Due to all these steps and programs, progress will be made in the creation and development of entrepreneurs in the future, Hamid hoped.

Expressing grave concern over the activities of some unscrupulous traders, he said, "There are some people who start their business and start dreaming of becoming millionaires overnight. They increase the price of goods unreasonably on the pretext of sun-rain, storm-storm."

The head of the state called on the entrepreneurs to give up the mentality of becoming rich overnight and advised them to run their business honestly with good customer relationships in order to sustain their business.

Recognising business as a noble profession, he said businessmen should also be vigilant and cooperate with the government so that the reputation of the entire business community is not tarnished by some dishonest individuals.

The head of state said the government's business and industry-friendly policies and initiatives have created a conducive environment for entrepreneurial development in the country and this opportunity must be used.

If a large section of the youth can be made entrepreneurs and a conducive business environment can be ensured for them, then it will be possible to transform Bangladesh into a developed and prosperous "Sonar Bangla" as envisioned by the Father of the Nation, he said.