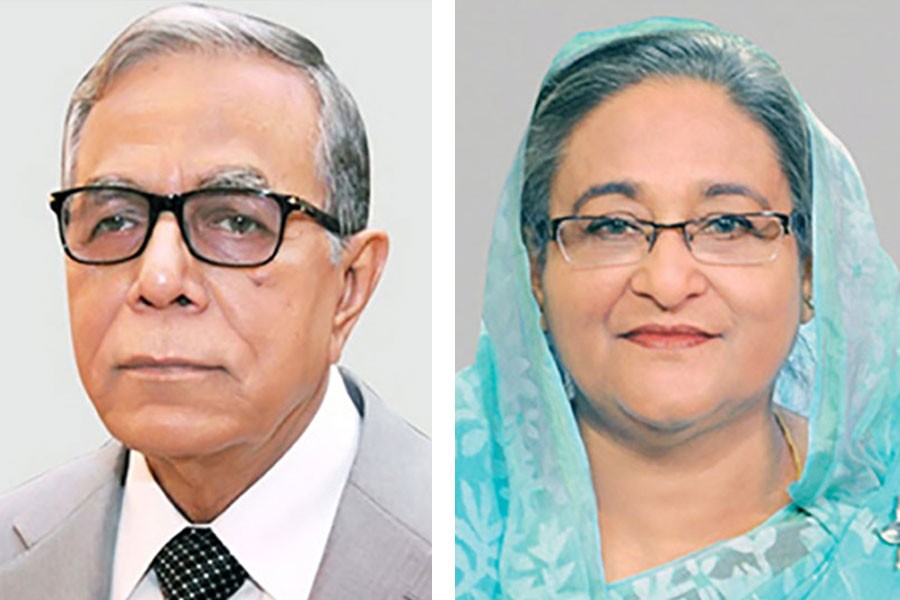 President M Abdul Hamid and Prime Minister Sheikh Hasina have extended their sincere greetings and warm felicitations to the countrymen living at home and abroad on the occasion of the 49th Victory Day, to be observed on Monday.

“On the eve of the joyous victory day, I extend my sincere felicitations and warm greetings to my fellow countrymen living at home and abroad,” the President said in a message..

“Independence is the greatest achievement of the Bangali nation. But behind the victory there were a long history of deprivation and bloodshed movement and supreme sacrifice of our people,” the President said.

He said the seeds of independence that was sown in the language movement in 1952 came into being through the declaration of independence by Father of the Nation Bangabandhu Sheikh Mujibur Rahman on March 26 in 1971 after overcoming various ups and downs and staging long movement and agitation against Pakistani rulers.

Abdul Hamid said the ultimate victory was achieved through a nine-month war of liberation under his uncompromising leadership and guidance on 16 December in 1971.

“Today, I recall with profound respect the greatest Bangali of all time, Father of the Nation Bangabandhu Sheikh Mujibur Rahman. I pay my deep homage to the valiant freedom fighters, who made supreme sacrifice in the war of liberation for the cause of country’s independence.

“I also extend my deep gratitude to the organisers and supporters, foreign friends and the people from all strata who directly and indirectly made meaningful contributions to our war of liberation. The nation recalls their contributions with utmost gratitude,” he said.

The President said the aims of the country’s independence were to attain political sovereignty as well as economic emancipation. “Keeping that in mind, Bangabandhu started his journey for achieving economic self-sufficiency by rebuilding economy and infrastructure of the war-ravaged country. But the progress of country’s democracy and development came to a halt after the assassination of Father of the Nation and his near and dear ones on August 15, 1975.”

With a view to materialising the unfinished tasks of Bangabandhu, Prime Minister Sheikh Hasina has taken Vision 2021, Vision 2041 and hundred years long ‘Bangladesh Delta Plan 2100’, Abdul Hamid said, adding that the objectives of these plans are to attain the targets of the UN Sustainable Development Goals (SDGs) by 2030 and to turn Bangladesh into a developed and prosperous country by 2041 respectively.

Noting that the country’s people are getting benefits of the development programmes, he said with successive economic growth, Bangladesh is marching forward in every socio-economic indicator including education, health, women empowerment, per capita income etc. Bangladesh has got recognition the status of low-middle-income country and graduated from least developed country (LDC) to a developing country, the President said the Padma Bridge, which is being constructed by our own resources, is now a reality, while mega projects like Metro Rail, Elevated Expressway are being implemented.

“Bangladesh is now a proud member of the elite satellite club through launching of Bangabandhu-1 Satellite into the space. With the pace of the continuing development, I am confident that Bangladesh will turn into a prosperous country by 2041, Insha Allah,” he said.

To move forward the advancement, Abdul Hamid said, collective efforts from all strata and the change of people’s behaviour and outlook are must.

People have to join the development process with positive mindset along with modern and scientific attitude making the desired development sustainable and speedy, he added.

The President noted that the country’s foreign policy is being exercised in accordance with the principle “Friendship to all, malice towards none” as adopted by Father of the Nation.

“Bangladesh has set a unique example of humanity in international arena by providing shelter to millions of forcefully displaced and tortured Rohingyas fled from Myanmar,” he said, adding Bangladesh believes in a peaceful solution to the problem.

Abdul Hamid urged the United Nations and the international community, including Myanmar, to take immediate effective measures for the permanent settlement of this problem.

He said the birth centenary celebration of Father of the Nation Bangabandhu Sheikh Mujibur Rahman and the Golden Jubilee celebration of the country’s independence, the two landmark and historic events of our history, will be observed throughout the country and outside Bangladesh in a befitting manner in 2020 and 2021 respectively.

The President said he do believe that observing the two magnificent celebrations by all strata irrespective of party affiliation would add a new dimension in our history.

He said there is no alternative to coordinated efforts to reach the benefits of independence, attained through the sacrifice of millions of martyrs, at people’s doorstep.

“Let us make more contributions from our respective positions in implementing the spirit of war of liberation and take the nation towards a prosperous future. Let our country turn into ‘Golden Bangla’ as dreamt of by our Father of the Nation Sheikh Mujibur Rahman through our sincere efforts, it is my expectation on Victory Day,” the President added.

Meanwhile, the Prime Minister described December 16 as an unique day for the Bangalee nation.

"Responding to the clarion call of the greatest Bangalee of all times the Father of the Nation Bangabandhu Sheikh Mujibur Rahman, the Bangalee nation earned ultimate victory on this day in 1971 after 23 years of intense political struggle and a 9-month bloody war against the Pakistani occupation forces," she said in a separate message.

“I extend my sincere greetings and warm felicitations to the country’s people on the occasion of the 49th Victory Day,” the premier said.

Paying deep homage to the Father of the Nation Bangabandhu Sheikh Mujibur Rahman, she recalled with gratitude the four national leaders, three million martyrs, two hundred thousand dishonoured women and the bravest sons of the soil-our freedom fighters, who earned our long-cherished freedom and independent Bangladesh.

“Under the undaunted leadership of Bangabandhu, the Bangalee nation got prepared for independence through Language Movement of 1952, Education Movement of 1962, 6-Point Demand of 1966 and 11-point Movement and Mass Upsurge of 1969,” Sheikh Hasina said.

“The Awami League secured an absolute majority in the general elections of 1970. However, Pakistanis prevented Bangalee from assuming the power. Father of the Nation realised that the oppression, persecution and deprivation meted out to the Bangalee nation would not be ended without achieving the independence.

The country-wide non-cooperation movement had started at the directives of Bangabandhu and preparations for waging armed struggle also had begun as part of the Liberation War, Sheikh Hasina said.

On the fateful night of 25th March of 1971, the Prime Minister said, the Pakistani occupation forces launched a brutal onslaught and committed genocide on the innocent and unarmed Bangalees.

She said Bangabandhu declared independence of Bangladesh at the early hours of the 26th March of 1971 resulting in the formal War of Independence, while the first government of the People’s Republic of Bangladesh was formed with Father of the Nation Bangabandhu Sheikh Mujibur Rahman as President, Syed Nazrul Islam as Vice-President and Tajuddin Ahmed as Prime Minister which was sworn-in on the 17th April of 1971 at the historic Mujibnagar and led the Liberation War.

The valiant freedom fighters earned the victory on the 16th December of 1971 by defeating Pakistani occupation forces and their local collaborators-rajakars, albadars and alshams, Sheikh Hasina said, adding: “We achieved an independent-sovereign country. Holding the red-green flag high the victorious Bangalees are marching forward towards the progressive path.”

She noted that when the Father of the Nation Sheikh Mujibur Rahman had fully engaged himself in the struggle to reconstructing the war-ravaged country, the anti-liberation forces in collusion with the war criminals assassinated him along with most of his family members on August 15, 1975.

“They had initiated the politics of killings, coup and conspiracy and obstructed the process to bring the killers of Bangabandhu to book through promulgating Indemnity Ordinance. They ruined the democracy by declaring Martial Law. They distorted the glorious history of our independence, debased its spirit. They defaced the constitution and suppressed the press freedom. Later, the BNP-Jamat alliance government had kept on doing so,” the premier said.

Noting that the Awami League, after a long 21 years of struggle and sacrifice, assumed the responsibility of running the government in 1996, she said: “Then again our party has been in government for last three consecutive terms since 2009 and relentlessly been working for uplift of the people. Bangladesh, one of the top five countries in the world in economic growth, is a ‘Role Model’ for development. We are the first in the world started implementing ‘Delta Plan-2100’.”

“In the last fiscal, we achieved record 8.13 per cent GDP growth. The poverty rate has now decreased to 21 per cent. Our per capita income has risen to US$1,909 and literacy rate 73.9 per cent. Country’s 95 per cent people are under electricity coverage. The average life expectancy of the people has jumped to 72 years. We are implementing a number of mega infrastructure development projects such as Padma Bridge, metro-rail, elevated express-ways, rail and waterways across the country,” the Prime Minister said.

She said the government is working with adherence to the ‘zero tolerance policy’ against militancy, terrorism and drug menace.

“We have established the rule of law in the country and executed the verdict of the trial of the killers of the Father of the Nation and the trial of the war criminals. We have peacefully resolved the land boundary issue with India.

“Disputes with India and Myanmar on maritime boundary have also been resolved. Bangladesh’s contribution to the various international forums for establishing global peace has been lauded. We have also joined the elite club of the satellite technology as the 57th nation of the world through launching Bangabandhu Satellite-1,” Sheikh Hasina said.

She said Bangladesh and UNESCO will jointly celebrate the birth centenary of Bangabandhu next year, while the government has been working to make Bangladesh a middle-income country by 2021 and a developed-prosperous one by 2041. “Bangladesh is moving ahead, it will keep on doing so.”

“On the eve of the golden jubilee of our independence, I would like to call upon all to play their due role from their respective positions to accelerate the development, uphold democratic polity and establish good governance frustrating all sorts of conspiracy against democracy and the government being imbued with the spirit of liberation war,” the premier added.

One-third of BD youth not in education, employment or training