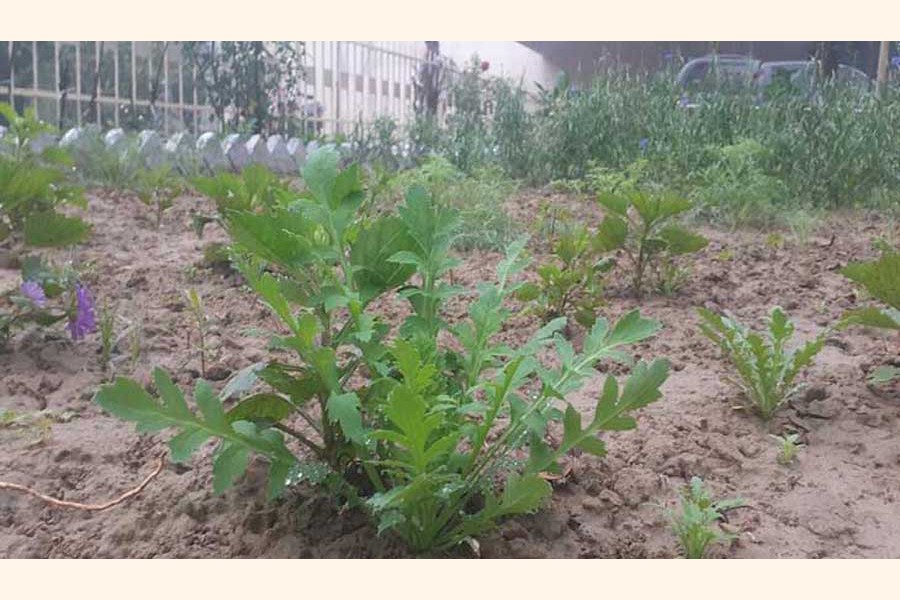 Poppy being cultivated at the garden of Centre for Scientific and Industrial Research, Rajshahi — FE Photo

RAJSHAHI, Jan 20: Poppy plant, an ingredient for preparing banned drug 'opium' is being cultivated at the garden of Centre for Scientific and Industrial Research, Rajshahi, on a large scale.

Though the plants are being cultivated to increase the beauty of the garden of office of CSIR, those can be sent to other places as well to prepare the drug.

However, the authorities of CSIR, Rajshahi, said they were unaware of poppy cultivation in their garden while the authorities of the Department of Narcotics Control in Rajshahi said, in no way, poppy could be cultivated or used anywhere in the country. If informed, they will destroy those plants.

Just after entering the main gate of CSIR, Rajshahi office, there are several poppy plants at the garden along with other plants.

There is also another garden beside the front garden where poppy plants are also seen growing. However, at present, a yellow coloured poppy flower of Indian origin was visible.

Moreover, there are several gardens inside the CSIR compound where some 250 to 300 poppy plants were seen to grow.

Purna Roy, gardener of CSIR informed, the flower was being cultivated in the garden for a long time. There are several varieties of those flowers (poppy plants) at CSIR's gardens, he added.

He said the plants have been cultivated for the purpose of beautification of the garden and within the next two week, all the plants will bear flowers.

He said there were some 300 such plants in the garden.

A researcher of CSIR, Rajshahi requesting anonymity, said poppy has been cultivated in the garden of CSIR for a long time and the plants are also being supplied to other places from here.

He said by extracting juice of the flower and plants of poppy, the drug opium can be prepared.

Dr Ibrahim, director of Rajshahi CSIR, said he was unaware of the incident.

He said he will enquire about it and if it is found true those plants will be destroyed.

Lutfar Rahman, deputy director of the Department of Narcotics Control in Rajshahi, said there are two types of poppy plants. Juice can be extracted from one type only. But, cultivation of both types of poppy plants is banned in the country, even for the purpose of beautification.

He said poppy was also earlier cultivated at the gardens of CSIR and in 2018 a team of DNC had then destroyed those plants but he was unaware of the cultivation of poppy there afresh. Those will be destroyed again, he said.