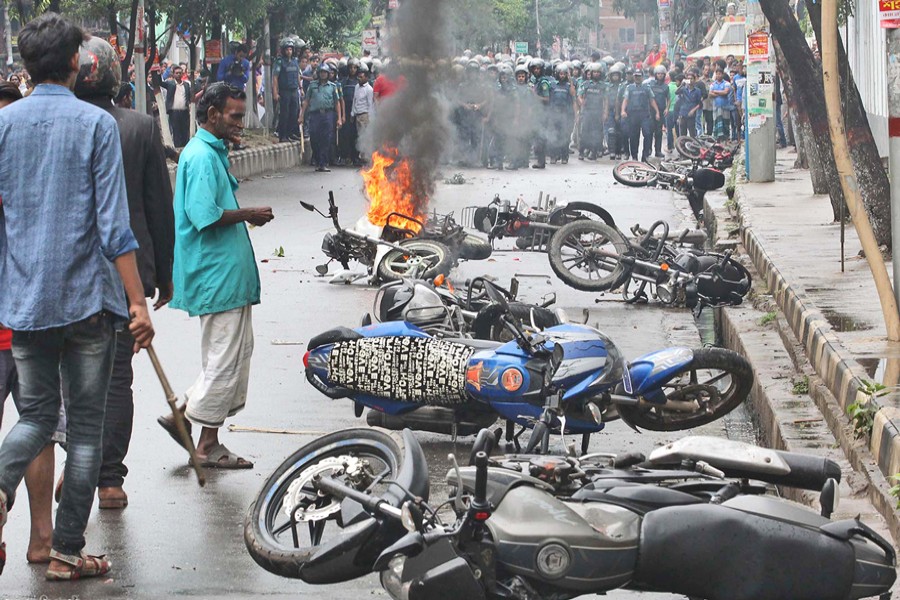 A number of motorcycles were torched during a clash between two groups of ruling party Awami League in front of a community centre at Azimpur in the capital on Thursday. The skirmish took place around 10:30am. — Focus Bangla

The Azimpur neighbourhood in Old Dhaka turned into a battleground on Thursday morning as violent clashes broke out there between followers of two Awami League leaders, reports bdnews24.com.

The clashes forced motorists to a halt in the area for almost two hours until 1pm.

Shah-e-Alam Murad, General Secretary of Dhaka (south) unit of the ruling Awami League, was set to collect and renew members for his unit on Thursday morning.

He booked Pearl Harbour Community Centre as the venue for the purpose but his followers found a pile of garbage dumped in front of it when they arrived there.

Followers of Abu Ahmed Mannafi, Senior Vice-Chairman of the Awami League's Dhaka unit, had planned to take out a protest rally on the same street at the same time.

The rally was to protest against what they called was "harassment of Mannafi". Mannafi is known to be a supporter of Dhaka South Mayor Sayeed Khokon.

Police reached the scene and bolstered security around the area.