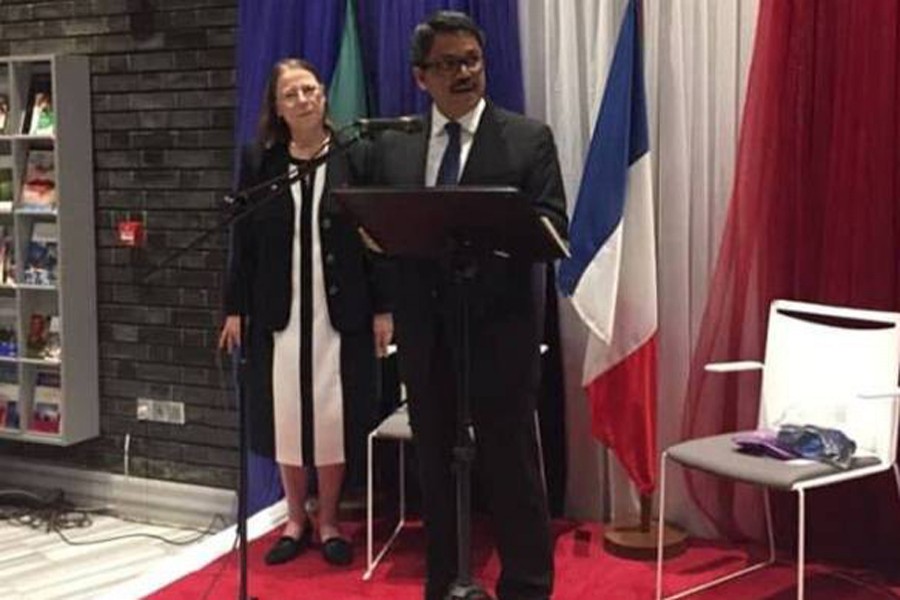 State Minister for Foreign Affairs M Shahriar Alam has hoped that the Election Commission, with the support of all political parties, administration and other stakeholders, will be able to hold an "inclusive, fair and neutral" general elections by the end of this year.

He made the remark while addressing as the chief guest at a reception marking the French National Day on Saturday evening. French Ambassador to Bangladesh Marie-Annick Bourdin also spoke.

"The fundamental rights envisaged in the constitution of Bangladesh reflect many of the human rights prescribed by international human rights law," he said.

The State Minister mentioned that Bangladesh is a country with rich ethnic, religious and cultural diversity.

Bangladesh encourages the contribution of civil society and NGOs in national socio-economic development as well as in the promotion and protection of human rights initiatives," he said.

"I am confident; the diversity and depth of our relations will continue to rise and widen, bringing tangible outcome and mutual benefits for the people of our nations," he said.

He wished the continued happiness and well-being of the friendly people of the French Republic and everlasting friendship and good relations between France and Bangladesh.

French Ambassador Bourdin said Bangladesh and France can do more together in consolidating democracy through free and fair elections, as well as inclusive, and in defending the human rights of all women and men in the world, as well as in their respective countries.

She said they are convinced that two countries can do and achieve a lot more together in ensuring sustainable development for all, implementing the 2030 Agenda and assisting each other in implementing international commitments.

She said the two friendly countries can do a lot in contributing to peace and stability, as both countries hold shared views on a number of issues of concern, and are active contributors to peacekeeping operations.

The Ambassador talked about two countries' role in promoting the importance of education and diversity of languages and cultures, in which are rooted the identity, the sense of belonging and individual rights of every citizen.

"They have been and remain key factors in our respective history and fight for emancipation," she said.

Ambassador Bourdin, while sharing a series of announcements, said President Emmanuel Macron has invited leaders from all countries who contributed troops in the 1st World War, and Bangladesh has also been invited, to commemorate the 1918 armistice, on the11th of November.

"Besides the commemorative ceremonies, France is organising the Paris Peace Forum, a Global Platform for Governance projects, aiming at consolidating peace and building a more cooperative and better organised planet, on November 11-13. Kindly take both documents: presentation of the Paris Peace Forum and call for applications, to see if and how you can contribute with your own initiative," she said.

The Ambassador said Bangladesh and France have developed warm and friendly relations since the early days of the fight for Independence led by Father of the Nation Bangabandhu Sheikh Mujibur Rahman in 1971.

Andre Malraux, who fought for freedom during the civil war in Spain, lent him a strong support, along with other intellectuals (B. Henri-Levy).

"Our President lauded the impressive economic growth achieved in Bangladesh over the last 10 years. Our Government has welcomed the announcement of the graduation of your economy from an LDC to a Developing country by 2021 or 2024, we salute this great achievement," said the French Ambassador.

She said they will keep on supporting Bangladesh economic development through their ODA (official development assistance) and technical assistance, as well as through private sector companies, reports UNB.