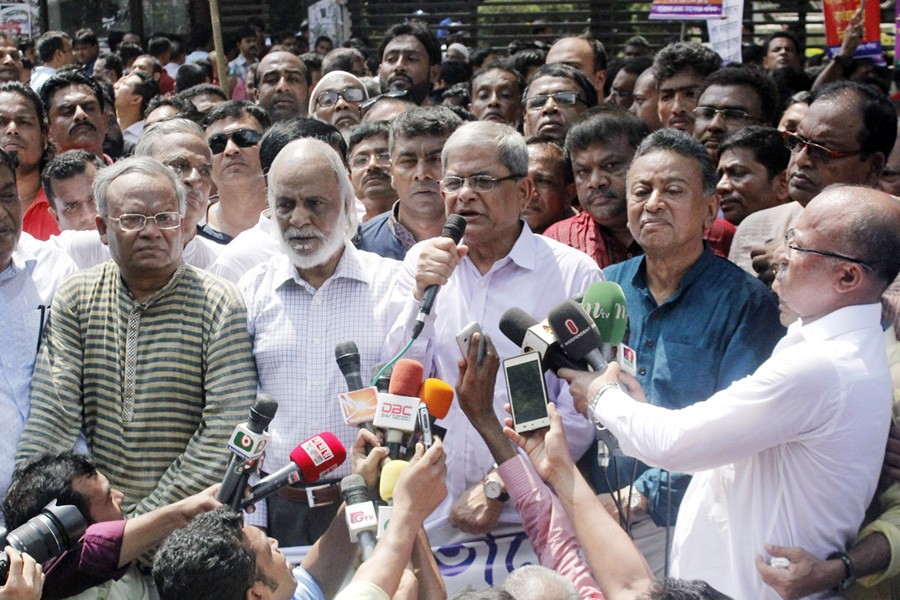 BNP secretary general Mirza Fakhrul Islam Alamgir speaking at a human chain, as part of their +98countrywide programme, protesting violence on Rohingya migrants in front of the National Press Club in the city on Friday. — Focus Bangla

BNP secretary general Mirza FakhrulIslam Alamgir demanded on Friday the government make effective diplomatic efforts to force Myanmar to resolve the Rohingya crisis, reports UNB.
"Our demand is very clear that the government gives food and shelter to the Rohingyas and ensures their security and treatment.
At the same time the government puts active diplomatic efforts to force the Myanmar government to take back the Rohingyas who fled the country", said Fakhrul.
He made the demand while speaking at a human chain in front of the National Press Club in the city.
As part of their countrywide programme, BNP organised the one-hour long human chain from 10:00 am to 11:00 am protesting the repression on Rohingyas in Myanmar.
Fakhrul said they don't want to know whether the Rohingyas are Hindu or Muslim as they are human beings.
"The Myanmar government has initiated a war against humanity. We have to put up resistance against them. Let's get united and raise our voice against the mass killing of Rohingyas and force Myanmar to take back those who fled the country," he said.
Voicing concern over trespassing of Myanmar Air Force helicopter into Bangladesh airspace, he said the Bangladesh government cannot strongly protest the incident due to its knee-jerk foreign policy.
Fakhrul said his party staged the human chain to register protests against the persecution on Rohingyas on behalf of the people of Bangladesh.