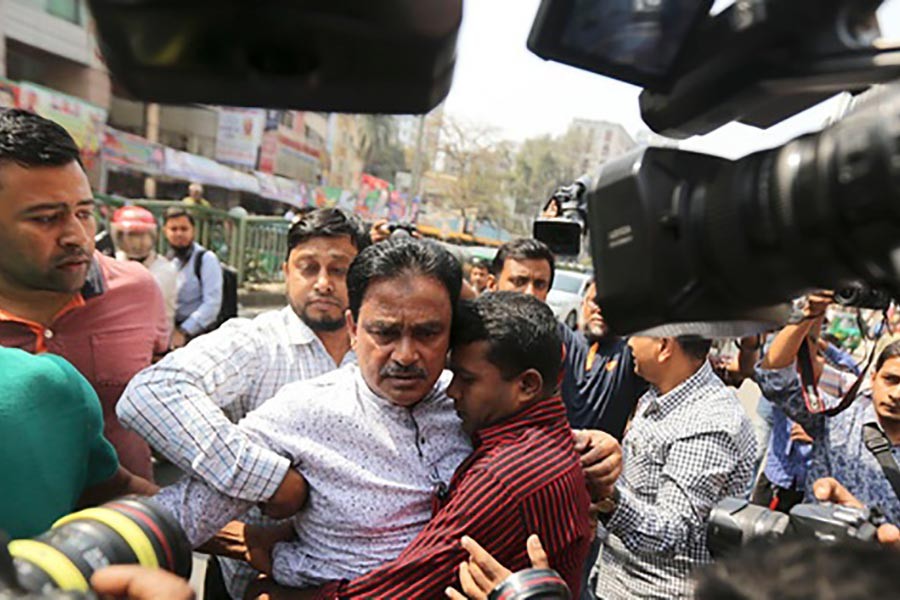 Police have detained BNP central leaders Syed Moazzem Hossain Alal and Mostafizur Rahman Babul from a protest in front of the BNP headquarter at Nayapaltan of Dhaka.

The black flag protest was called on Saturday against the police refusal to allow a mass rally against the conviction of party chief Khaleda Zia.

A few hundred activists had gathered at the location for the protest by 10:30am. Police took action after they took up positions on the road.

The law enforcers dispersed the protest using batons and water cannons around 11am.

Syed Moazzem Hossain Alal was detained when he came out from the office after attending a press conference of BNP Secretary General Mirza Fakhrul Islam Alamgir.

Several BNP leaders, including Mirza Fakhrul, were struck by the water from the cannons.

The BNP activists retreated inside their offices and locked the gates while continuing to chant slogans.

“They viciously attacked the activists and dragged them onto police vans,” he said.

“This unprovoked attack on a completely peaceful protest shows the misrule holding sway over the nation,” he said.

“So we took action,” he told the media on the scene.

According to bdnews24, the BNP had applied for permission to hold a mass rally at the Suhrawardy Udyan or Naya Paltan on February 22.

But the party was denied by police. The party responded with the announcement of Saturday’s black flag protest.

The police are continuing their attempts to detain BNP activists from the alleys near the party’s offices.