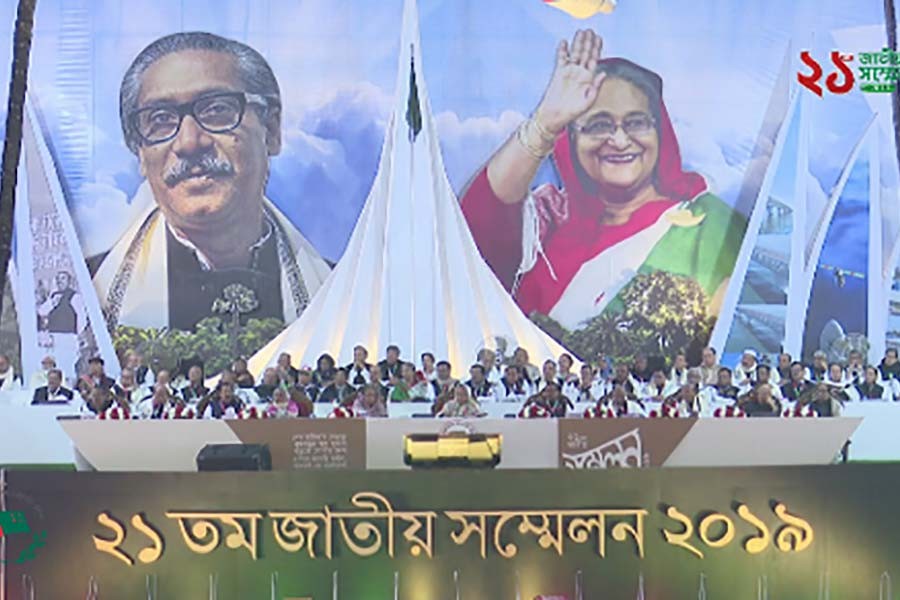 Sheikh Hasina, also the AL president, opened the two-day council of the party by hoisting the national flag and releasing balloons and pigeons at the venue that happens to be the site of Bangabandhu’s landmark 7th March address and surrender of Pakistani troops in 1971.

The theme of the council is “On the way to implement Bangabandhu’s dream of Sonar Bangla under Sheikh Hasina’s leadership, being advance irresistibly: We are Bangladesh”. The main council session will be held on December 21 at Institution of Engineers drawing over 7,000 councilors from across the country.

The council venue wears a festive look. Portrait of Bangabandhu and Sheikh Hasina are seen in the area along with some festoons carrying the history and tradition of AL as well as the symbols of party’s development activities.

The main stage of the council is 102 feet in length and 40 feet in width and looks like a ‘Boat’, shipping on the Padma River.

Portrait of National Memorial is on the stage and behind the memorial, Bangabandhu and Sheikh Hasina’s portraits are also there.

A total of 50 thousands councilors, delegates, leaders and activists are participating the council.

Stringent security vigil have been enforced in the capital coinciding with the council while Awami League and some 2,000 trained party volunteers have been mobilized to ensure discipline and security in and around the council venue.

“The party volunteers will work alongside law enforcement agencies in a coordinated way,” member secretary of Discipline and Volunteer Affairs sub- committee for the council, AFM Bahauddin Nasim said.

He said some 2,000 volunteers have been drawn from Swechchhasebak League, Jubo League, Chhatra League and other likeminded organization to ensure security and discipline at the council venue.

AL General Secretary Obaidul Quader said the new committee, to be form through the council, will be modern and well-organised with the new and old people under the leadership of Sheikh Hasina.

“We have to go forward keeping Bangabandhu’s ideology in heart,” he added.

Awami League, which was founded in 1949, waged the Bengali nationalist movement nearly seven decades ago and subsequently steered the country’s 1971 Liberation War.