She urges AL men to move with principle, ideology 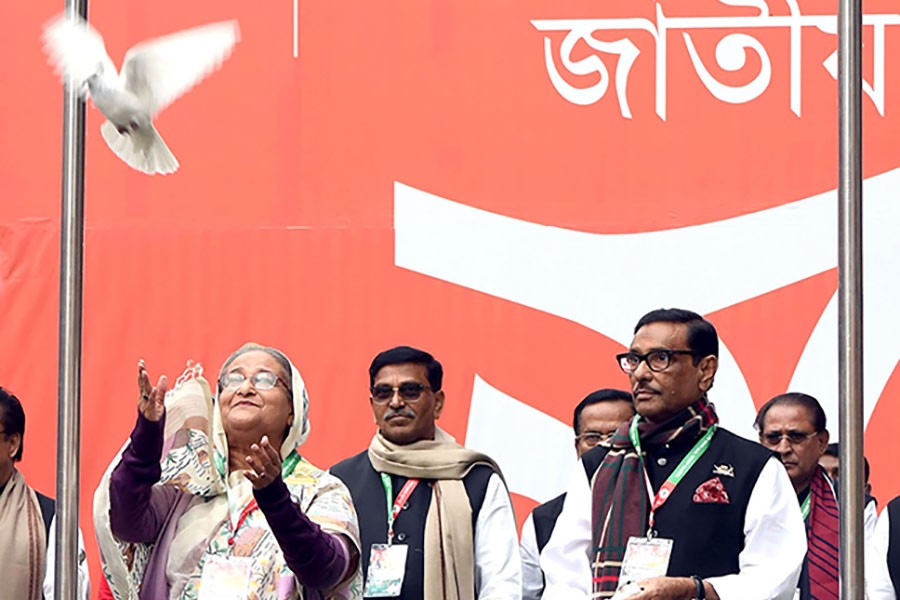 Prime Minister Sheikh Hasina releasing a pigeon during the inaugural session of Awami League's 21st triennial national council-2019 at the historic Suhrawardy Udyan in the city on Friday. -PID Photo

Sheikh Hasina, the president of Awami League, made the remarks while addressing the inaugural session of the 21st triennial national council-2019 of the ruling party at the historic Suhrawardy Udyan in the city on Friday.

She inaugurated the council of the country’s oldest political party at 3:05pm by playing the national anthem, hoisting the national flag and the party flag, and releasing pigeons and balloons amid much enthusiasm and festivity, report UNB and BSS.

The prime minister mentioned that she revitalised the party over the years to make it the largest and strongest political party.

“We suffered splits among us on one or two occasions even after that (her return to Bangladesh in 1981). I rejuvenated the party following the rifts. I roamed throughout the country and revitalised it gradually. So, today Bangladesh Awami League is the biggest and strongest organisation in Bangladesh,” she said.

The Awami League president urged leaders and workers of her party to move with principle and ideology.

The premier asked the party stalwarts to stay ready for making sacrifice to enable people getting adhered to principle and ideology for achieving anything great.

Sheikh Hasina, also the president of AL, added that those who could make such a sacrifice become successful and could give something to the country and the nation.

Quoting a comment of Bangabandhu, she said temporary benefits are achieved if any party moves with leaders without principles. “But those leaders are not found during any struggle — it’s the biggest reality,” she said.

The premier said the Awami League is that organisation which made sacrifice time and again. “The people of Bangladesh today got its fruits, and today’s Bangladesh is advancing towards the path of development and prosperity which Bangabandhu dreamt of,” she said.

Hasina said there were many efforts to annihilate Awami League completely since Pakistan period.

"The attacks came on Awami League during the regimes of Yahya Khan, Ayub Khan, Ziaur Rahman, HM Ershad and even Khaleda Zia," she said.

But AL could not be obliterated as the ideology-based organisation was built at the hands of Father of the Nation Bangabandhu Sheikh Mujibur Rahman. “Though it was damaged for the time being, it could not be destroyed completely,” she added.

Sheikh Hasina said that Bangladesh is moving ahead and it will continue to advance further, asserting that none will be able to play ducks and drakes with the people of the country.

“In this council, it’s our pledge to build a hunger and poverty-free Sonar Bangla as dreamt by Bangabandhu Insha Allah,” she said.

Some 15,000 councillors and delegates took part in the council. Leaders of other political parties and representatives of various professions, diplomats of different countries including the USA, the UK, India, China, South Korea, the European Union, Germany, Iraq, Palestine, Thailand, Indonesia and Vietnam also joined the inaugural session.

The council session will be held at the Institute of Engineers on Saturday to elect the next committee of the ruling party for a three-year term. Some 7,500 councillors from across the country will attend the council session.