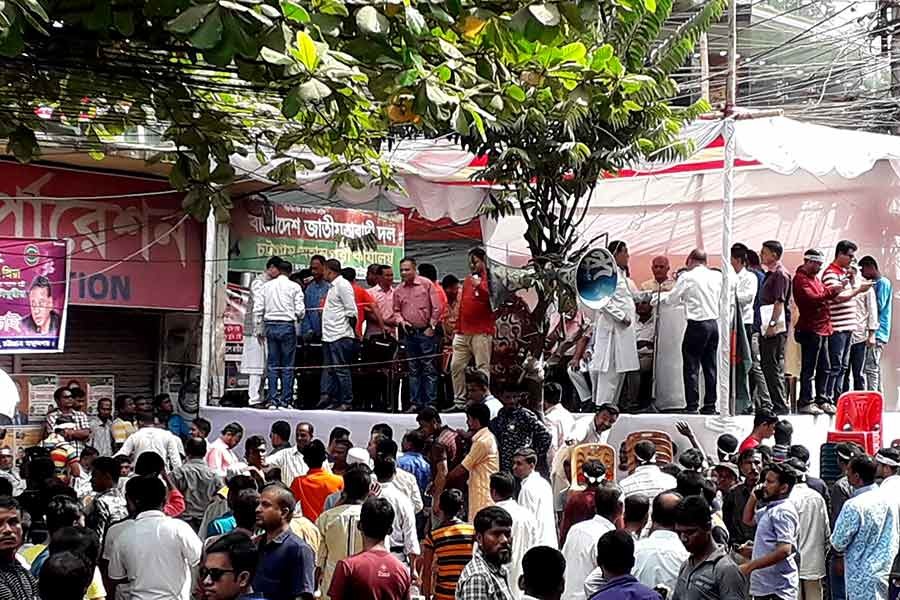 The rally of Jatiya Oikyafront has started in front of BNP office in Chattorgram with an aim to mobilise public support in favour of the alliance's seven-point demand.

The rally activities started around 1:30pm on Saturday with recitation from the holy Quran and holy Gita.

Before the beginning of the rally, senior leaders of the Oikyafront visited the shrine of Hazrat Shah Amanat (R) and offered fateha there.

On Friday, Chittagong Metropolitan Police authorities gave the alliance permission to hold the rally in front of BNP office at Kazir Dewri instead of Laldighi Maidan on some condition.

As per the conditions, he said, the rally must be concluded by 5pm.

This is the second rally of the newly formed alliance as it held its maiden one in Sylhet on October 24.

They were chanting various slogans demanding Khaleda's release from jail.

Huge law enforcers have been deployed around the rally venue to maintain law and order.

The Oikyafront's seven-point demand includes installation of a neutral interim government, dissolution of parliament, reconstitution the Election Commission, release of all the political prisoners, deployment of army and cancellation of the move to use Electronic Voting Machines (EVMS) for holding the next polls in fair and acceptable manner.

On October 13, BNP together with Dr Kama Hossain-led Jatiya Oikya Prokriya, JSD and Nagorik Oikya launched the Jatiy Oikyafront to press for their seven-point demand.