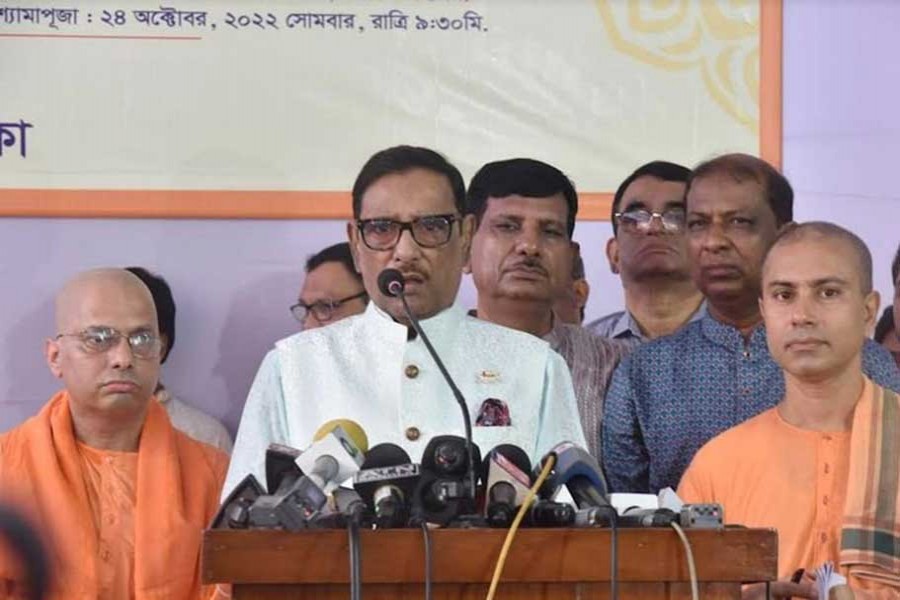 Awami League General Secretary and Road Transport and Bridges Minister Obaidul Quader on Sunday urged all concerned to remain alert to maintain peace and harmony during the ongoing Durga Puja.

"A vested quarter wants to shift the responsibility to the government after carrying out attacks on the Hindu community," he said while visiting Ramakrishna Mission puja mandap in the capital on the Mahasaptami day of Durga Puja, reports BSS.

Urging all to remain alert, Quader said an evil force wants to mean that the minorities are not safe under the Awami League regime.

"The puja committee told me that none gets punished for communal attacks...many criminals were brought to justice in Bangladesh under the Sheikh Hasina government. Even, members of her own party (AL) have been sent to jail. Perpetrators will not be spared if they carry out attacks on Hindu temples, houses and puja mandaps," he said.

The AL general secretary said the national election is approaching and ahead of the polls, the vested quarter, by conducting attacks on the Hindu community, wants to inform the Indian government that those were carried out by the Awami League.

"So, remain alert against the evil force," he added.

Urging the Hindu community members not to get panicked on the occasion of Durga Puja, he said the AL leaders and workers remain alert to this end.

The road transport minister said  Sheikh Hasina's government has been in power for 13 years while Durga Puja was held in the 13 years.

There were 30,000 puja mandaps in the country last year but the number increased to over 32,000 this year, he said.