mps criticism on sc verdict might have violated law shahdeen 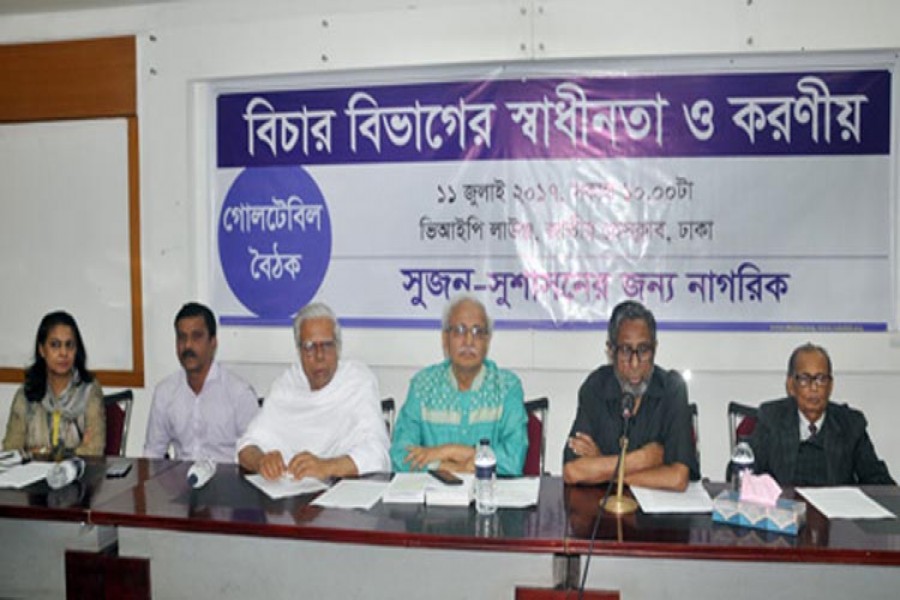 Senior lawyer Shahdeen Malik has said lawmakers might have violated the law by criticising in the legislature the Supreme Court verdict on the 16th amendment to the Constitution.

He was addressing a roundtable discussion on Tuesday where civil society leaders and legal experts called for ensuring independence and dignity of the judiciary for the sake of the country's socio-economic development.

The speakers also pleaded for raising budgetary allocation, appointing capable judges along with transparency in their recruitment and taking necessary steps to restore people's confidence on the judiciary.

The roundtable discussion on 'Independence of the judiciary and things to do' was organised by Shushasoner Jonno Nagorik (Shujan), a citizens' platform that advocates good governance, at the National Press Club.

Speaking on the occasion, Mr Shahdeen Malik said the country cannot increase its socio-economic development without ensuring independence of its judiciary system.

"You cannot refer to any developed country in the world whose judiciary is subjugated to any other entities," he said.

He urged lawmakers to review and analyse their heated discussions at the parliament on Sunday by watching the video footage with the help of YouTube.

He identified poor budget allocation as a key challenge to the desired functioning of the judiciary.

"The less strong the judicial service is, the more will be incidence of violence and anarchy in the country. Such a scenario would hamper economic growth," he said.

The government has reduced allocation for the country's judiciary by Tk 1 billion to Tk 14.23 billion in the ongoing fiscal year (FY) 2017-18 from the previous FY, he noted.

The budget for the Supreme Court has been cut by Tk 20 million to Tk 1.67 billion for the same period.

Mr Shahdeen Malik also underscored the need for framing policy to ensure transparency in selection of judges, prosecutors and attorneys.

Mr Ebadul Haque said the strength of human resources in the country's judiciary now is very low compared to the country's population.

"There are 0.3 million cases pending in the Supreme Court," he said.

Syed Abul Maksud said the status of judiciary is a reflection of the respective countries' politico-economic conditions.

Underscoring the need for judiciary's independence for ensuring the people's right to justice, the columnist said, "The dignity of the judicial system needs to be upheld, besides keeping it free from external forces."

The other speakers said many people in the country believe their freedom is being curbed in many ways. The government must pay attention to this common fear.