Moudud Ahmed laid to rest at family graveyard in Noakhali 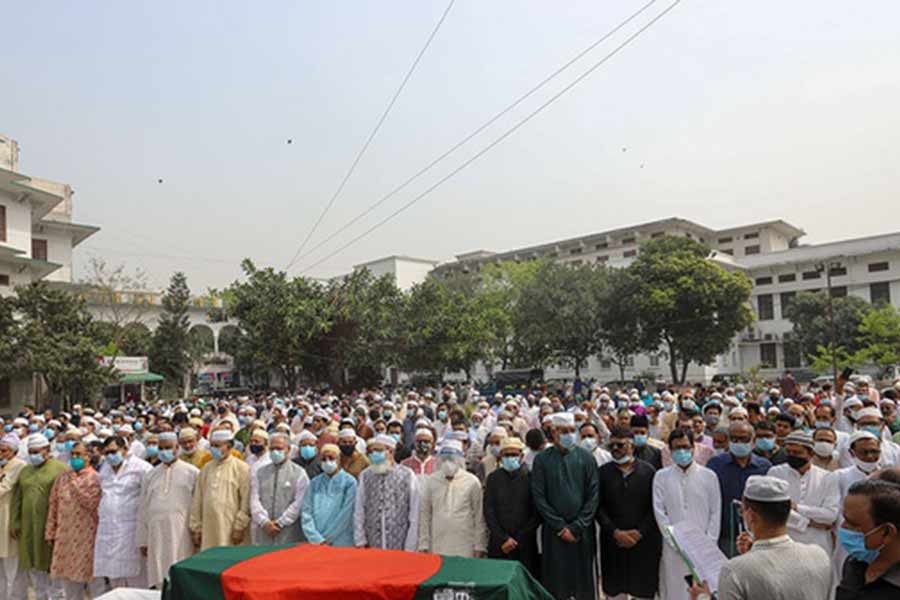 BNP leader Barrister Moudud Ahmed was laid to eternal rest at his family graveyard in Noakhali’s Companyganj after several rounds of funeral prayers in Dhaka and Noakhali on Wednesday.

The 81-year-old former minister died at a hospital in Singapore last Tuesday. He was suffering from kidney and lung complications.

The body was flown back on Thursday and taken to his Gulshan home. It was kept at Evercare Hospital mortuary on Thursday night, report bdnews24.com and UNB.

The BNP leader’s first janaza was held in Singapore with the participation of Bangladeshi expatriates living there.

The mortal remains of the veteran politician and lawyer were taken to the Central Shaheed Minar in Dhaka for people to pay tributes on Friday morning.

People from all walks of life paid their last tributes to veteran politician at the Central Shaheed Minar.

Later, Moudud’s body was taken to the Supreme Court premises where lawyers and judges paid their last respect and joined the second funeral prayer of the renowned lawyer.

Chief Justice Syed Mahmud Hossain, judges of the Supreme Court’s Appellate Division and High Court Division, and Fisheries and Livestock Minister SM Rezaul Karim were among the participants of the funeral prayers for Moudud at the Supreme Court premises.

The coffin of the former prime minister was taken to BNP's Nayapaltan central office at about 11:00 am.  BNP secretary general Mirza Fakhrul Islam Alamgir covered the coffin with BNP’s flag. Several thousand BNP leaders and activists paid last tribute to Moudud and participated in third namaz-e-janaza in front of their party office.

Moudud was a “legend” in Bangladesh’s politics and a “guardian” of the BNP, Mirza Fakhrul Islam Alamgir said in a brief address prior to the janaza.

Then the body was taken to Moudud’s ancestral home in Noakhali. The former law minister was laid the rest at his family graveyard after several rounds of funeral prayers in Kabirhat and Companyganj upazila of the district.