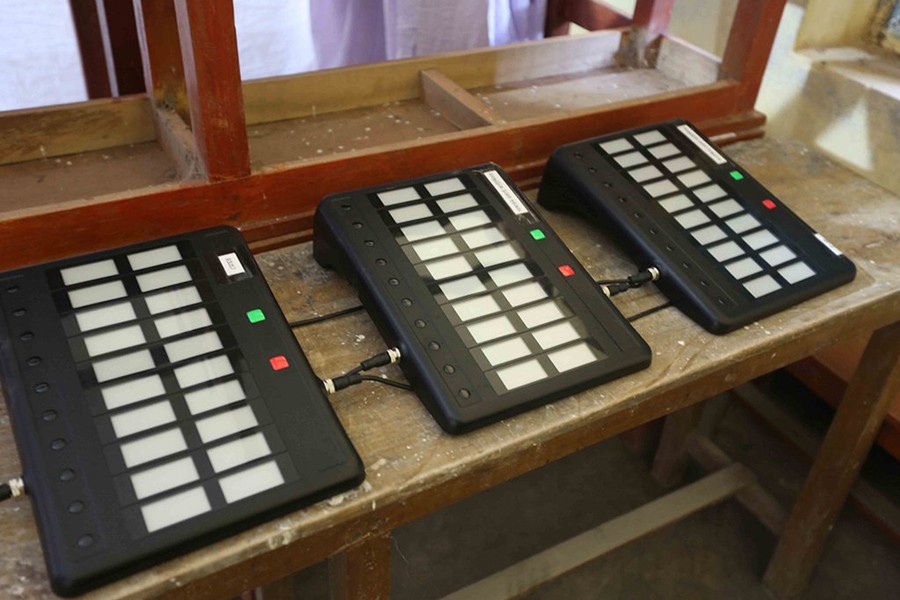 EC moves one step closer to procure EVMs for next general election, says Fakhrul alleging that vote rigging will be made easy. File photo

Strongly opposing the Election Commission's move to use Electronic Voting Machines (EVMs) in the next general election, BNP on Thursday said Awami League is now 'depending on machine losing confidence in people'.

Speaking at a press conference, BNP secretary general Mirza Fakhrul Islam Alamgir also warned that the Election Commission (EC) of paying a heavy price if it does not revoke its plan to use the EVMs which will only create a scope for 'digital vote rigging'.

"People in no way accept the conspiracy of looting their huge money in the name of procuring EVMs with an evil motive. So, we once again ask the EC to immediately rescind its move to buy EVM/DVM," he said.

Otherwise, the BNP leader said, people's lack of confidence in the EC will deepen further, and the Commission will be held responsible for any emerging situation.

"We would like to strongly tell the Election Commission to retreat from the path of digital rigging. Or else, all the conspirators will have to pay a price for such evil efforts," he warned.

BNP arranged the press conference at its Chairperson's Gulshan office to give the formal party's reaction to the EC's plan to use EVMs in 100 constituencies in the 11th parliamentary polls.

Fakhrul presented various examples and logics defending the party's opposition against the EVM use as it can be manipulated.

Mentioning that Chief Election Commissioner KM Nurul Huda assured people of not using the EVM after he had taken the charge of the Commission, he questioned what now prompted the Commission to hurriedly procure 0.15 million EVMs for a staggering Tk 40 billion.

The BNP leader said the election results can be manipulated through the EVMs as five votes can be given with one click.

He urged the Election Commission to engage in talks with all the stakeholders and take steps for ensuring a fair voting through the customary ballot paper system.

The proposals include, installing closed-circuit cameras at 44,000 polling stations, developing the infrastructure of the educational institutions to be used as voting centres, providing upazila election officers with necessary transport facilities, setting up a modern printing press for printing ballot papers, enhancing the capacity of officers involved with the election process, providing all the upazila election offices with video cameras, taking a 'voter education and awareness programme' and ensuring sufficient honorarium for election officials and Ansar-VDP and village police members.