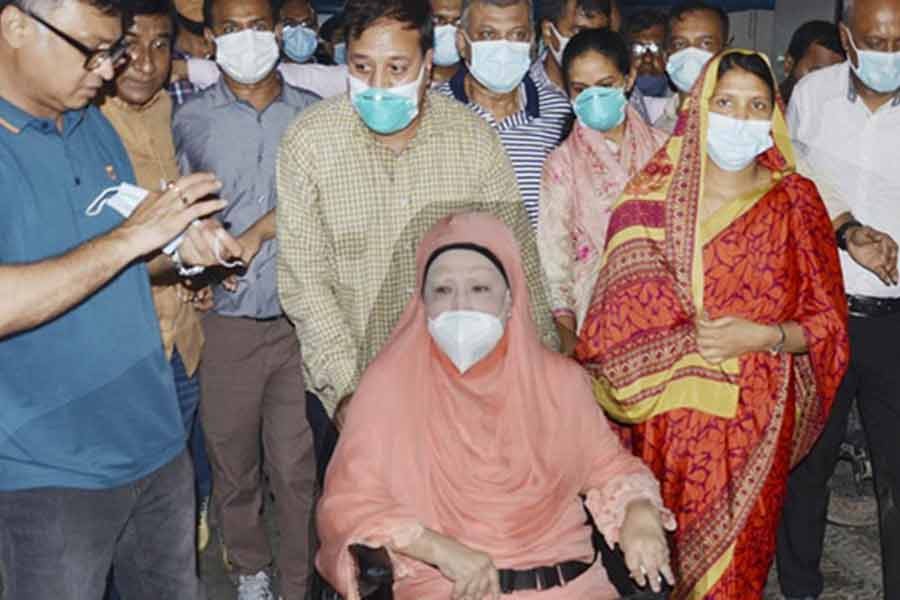 BNP Chairperson Khaleda Zia returned home on Friday evening after a 14-day stay in the capital's Evercare Hospital for the treatment of her various health complications, including blockages in her arteries.

The BNP chief left the hospital at about 5:40 pm and reached her Gulshan residence around 6:10 pm, reports UNB.

Earlier at a press conference, the medical board formed to ensure Khaleda’s treatment said the ailing BNP chief was discharged from the hospital due to a risk of Covid infection as the virus cases are on the rise again in the country.

Dr Shahabuddin Talukder, the head of the medical board, said, "Madam (Khaleda) is still ill. But she’s now stable. We don’t want to keep her here (hospital) now amid the surge in Covid cases. There’s a chance of Covid and other infections if she now stays here.”

He also feared that her condition will be very critical if Khaleda gets a viral or bacterial infection. “That is why the full medical board has decided to release her from the hospital.”

The physician said, “If she faces any complications further, she will be admitted to the hospital immediately.”

“Bleeding complication is now a very challenging matter for her. As she has a liver cirrhosis problem, she is now at high risk of bleeding. We overcame her kidney complications. There are still two blockages in her coronary arteries,” he said.

Prof Shahabuddin said Khaleda will have to be kept under full monitoring though she is going to stay at home.

He said the doctors will ensure her proper treatment at her residence.

Khaleda was admitted to Evercare Hospital on June 10 as she complained of chest pain.

Later, doctors said she suffered a heart attack due to 95 per cent blockage in her left artery and a stent was placed there by removing the blockage.”

Two more blockages were found in the arteries of the BNP chairperson through a coronary angiogram.

She was shifted to a cabin from the Coronary Care Unit (CCU) on June 15.