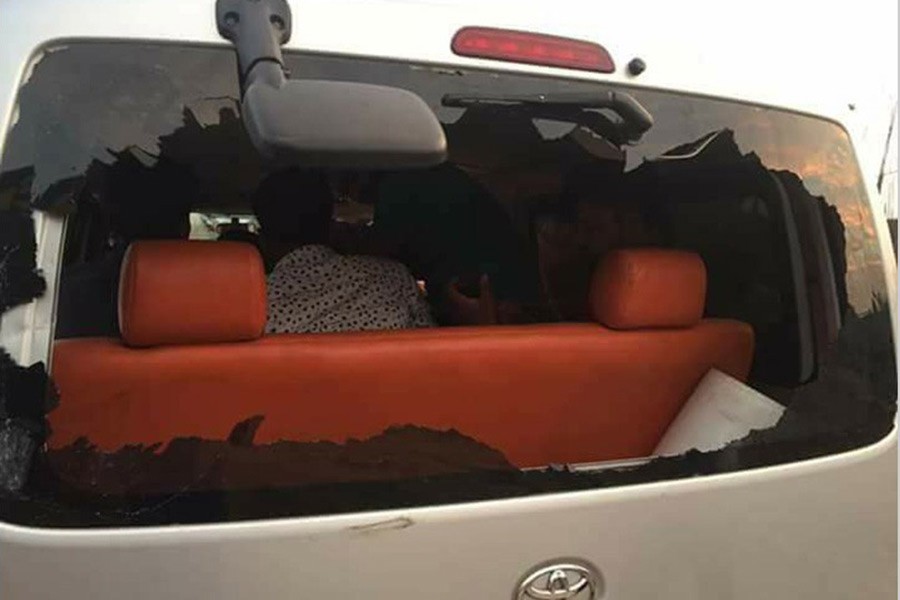 One of the vehicles damaged during Saturday's attack. Photo courtesy: BNP

BNP Chairperson Khaleda Zia has alleged that the government knows about those responsible for attack on her motorcade in Feni.

"I would like to say the government knows it very well who perpetrated the attack. Their photographs have already been published," she said.

The former Prime Minister made the remarks while talking to reporters after distributing relief materials among Rohingya refugees at Moynargona camp in Ukhiya upazila of Cox's Bazar on Monday.

"We have come here to visit Rohingyas and give them some assistance, but on our way my convoy came under attack leaving many journalists injured," she said.

A UNB report said Khaleda urged the government to stop this sort of happenings saying that such incidents will not bring any good for the government. "Instead, it'll make you completely isolated from people. So, stop such acts."

"They attacked motorcade to get media coverage," he alleged.

Hanif said Khaleda wanted to see a mass procession in support of her, but when she saw that was not happening, they planned the attack.

The ruling party leader was speaking at a scholarship-providing programme among poor and meritorious students organised by Enam-Anar Public Welfare Foundation at Dhaka Reporters Unity in Dhaka on Monday.

"They are trying to catch fish in murky water and it has been proved that the party is always involved in conspiracy,"  Hanif alleged.

He said, "Khaleda did not have any intention to support Rohingyas, if she had any such intention she would have gone there by air, but she tried to stage a showdown."

The attackers would be brought to the book, he hoped.

"The miscreants must be brought to the book - no matter who they are, we want to identify them," Hanif added.