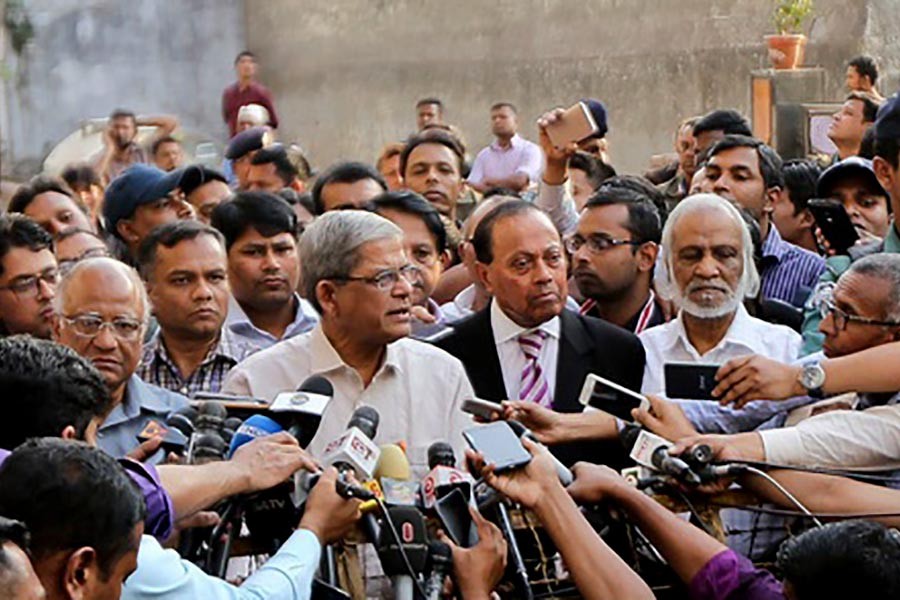 The BNP leader made the remarks while talking to reporters after meeting Khaleda in old central jail at Nazimuddin Road in the city on Wednesday.

He said BNP chairperson's morale is very high. "She is thinking about the country staying in jail," Fakhrul claimed.

Fakhrul said Khaleda Zia categorically asked them not to pay heed to anyone's provocation and continue the peaceful movement.

Fakhrul said their chairperson also asked them to inform people that she is mentally very strong and her physical condition is good.

"Khaleda also said she is ready for any sacrifice for the sake of the country and democracy," he said.

Earlier, an 8-member BNP delegation, including Fakhrul, met Khaleda in jail in the afternoon.

It was the first meeting of party senior leaders with the BNP chief since she went to jail a month back after being convicted in a graft case.

Talking to Khaleda, Fakhrul said they could realise that she is very confident that the truth will prevail.

"We also think the truth will finally be established," he added.

The BNP leader said they will carry out their movement for freeing Khaleda and restoring democracy alongside continuing a legal battle.

Replying to a question, he said their party and its movement are now run by a joint leadership.

"We're taking all the decisions in consultation with our acting chairman," he added.

Fakhrul said they got the chance to meet Khaleda after submitting an application to the Home Secretary.

According to UNB, the BNP delegation met Khaleda around 3:15pm and came out of the jail around 4:32pm.