Khaleda anxious about getting justice 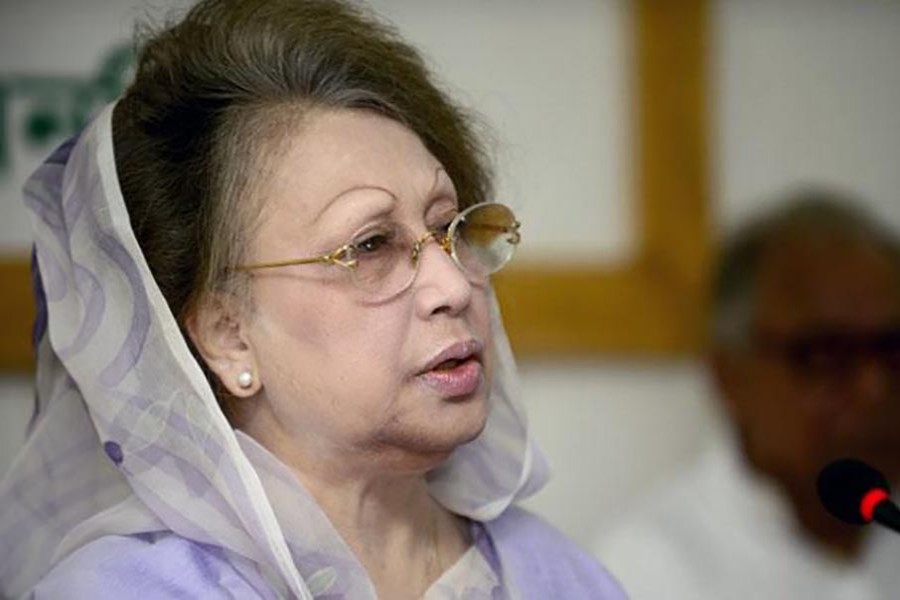 BNP Chairperson Khaleda Zia said she is anxious about getting justice in the cases filed against her considering the current state of the judiciary.

Khaleda expressed her anxiety while giving her self-defence statements in the Zia Orphanage Trust graft case for the fifth day Thursday before the makeshift court of Special Judge-5 at Bakshibazar.

She also alleged that 36 cases have been filed against her without any legal basis as she is active in politics, reports UNB.

"All the cases have no legal basis and the allegations are baseless and untruth," said Khaleda.

Referring to resignation of Chief Justice SK Sinha, the BNP chief also said a climate of no justice has been created in the country by the desperate activities of the ruling quarter.

"I fear that they (govt) have destroyed the scope and atmosphere for justice. So, I'm giving my self-defence statements fearing whether I'll get justice from the court," said she.

Khaleda alleged that SK Sinha was forced to resign for not giving the verdict in the 16th amendment case as per the will of the government. "When the Chief Justice met such a fate, is there any atmosphere for other judges to ensure justice?" she questioned.

About Zia Orphanage Trust graft case, Khaleda said she did not hold any post at the Trust, and she had no involvement with bringing money for it or its expenditure. "No one of the trust is any government employee or official. A case can be filed under the Trust Act if anyone violates rules or indulges in any irregularity. How did the Anti-Corruption Commission file the case over so-called irregularities and graft of the trust?"

The BNP chief also said she cannot fathom why she has been made an accused in the case when there is no corruption in Zia Orphanage Trust.

Khaleda started presenting her self-defence statement in the Zia Orphanage Trust graft case before the court on October 19.

As she could not complete her statement today, the court fixed next Thursday (November 23) for further hearing on the case.

On July 3, 2008, the Anti-Corruption Commission filed the Zia Orphanage Trust graft case with Ramna Police Station accusing Khaleda Zia, her eldest son Tarique Rahman, and four others for misappropriating over Tk 21.0 million (2.10 crore) that came as grants from a foreign bank for orphans.