Hasina questions whether BNP’s movement is to save ‘thief’ 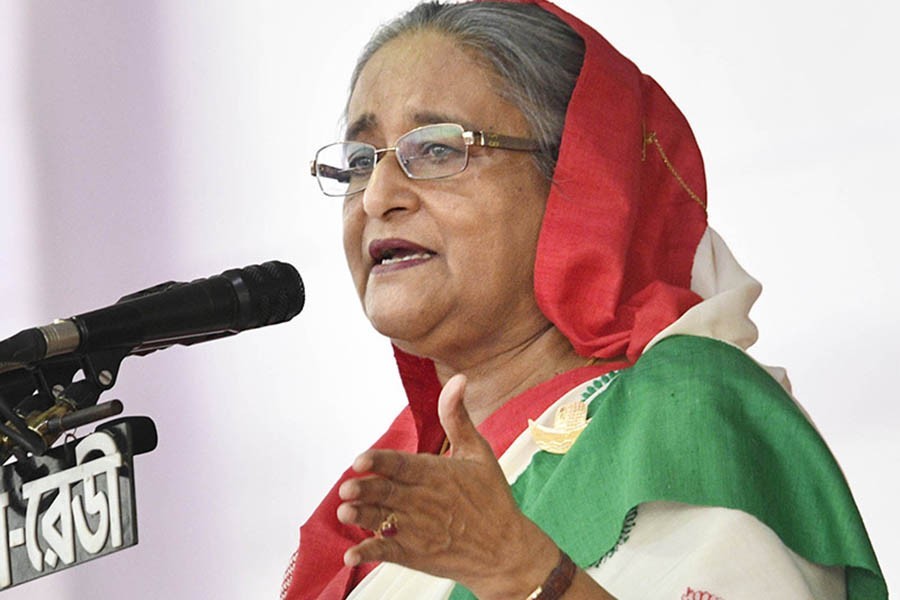 The prime minister has sharply criticised the BNP leaders for their movement to have their party chief released, reports UNB.

At a Rajshahi programme on Thursday, Sheikh Hasina said if BNP’s movement is for the thief who has landed in jail for plundering money.

According to her, "Today, BNP leaders are carrying out a movement. For what is this movement? Their leader has landed in jail for looting money. Is the movement for the thief?"

The PM was addressing a public rally at the Rajshahi Government Alia Madrassah Maidan in the city.

The premier said, "She (Khaleda) is enduring the punishment today as she couldn't provide orphans the money that came for them in the last 27 years."

“Where the orphanage is, how many orphans are there and have the orphans got a single penny?” said Hasina, adding that BNP could not answer to these questions.

Hasina said the money was brought from abroad for setting up an orphanage in 1991, but they embezzled it resorting to anomalies.

She remarked that looting and stealing are their (BNP’s) characters. “Bangladesh was the world champion in corruption index for five consecutive years when BNP was in power."

She later sought vote for 'Boat', the election symbol of Awami League, in the next parliamentary elections and upcoming elections to local bodies.

The ruling AL chief said her government is developing the country and this trend of development will continue. "We'll make the country prosperous and free from hunger."

According to her, "If anyone fails to contain greed of plundering orphans' money, what will he or she do for the country?

She also talked about Bangabandhu Memorial Trust fund and said the caretaker government desperately searched for possible anomalies in the trust fund aiming to implicate her in the case, but it found nothing.

"Now you can think what welfare they can do, who can burn people to death."

She described various development work carried out by the AL government and said her government's main objectives are to carry out development programmes and ensure the welfare of people.

Referring to Bangla Bhai, the Rajshahi region was a sanctuary for terrorists, militants and Bangla Bhais, and one people could not sleep in peace when BNP-Jamaat was in power. "BNP-Jamaat clique had made Rajshahi a city of terrorism and created Bangla Bhai."

She said though the AL-backed mayoral candidate was not elected in the last election to Rajshahi City Corporation in 2013, the government allocated huge funds for the development of the city, but the mayor failed to implement the development projects.

Observing that there is no Monga (famine) in the northern region anymore, she said her government removed the famine taking effective steps against it.

Earlier in the day, the Prime Minister opened 20 development projects and laid the foundation stones of nine others by unveiling their plaques at the madrasah maidan in the city.