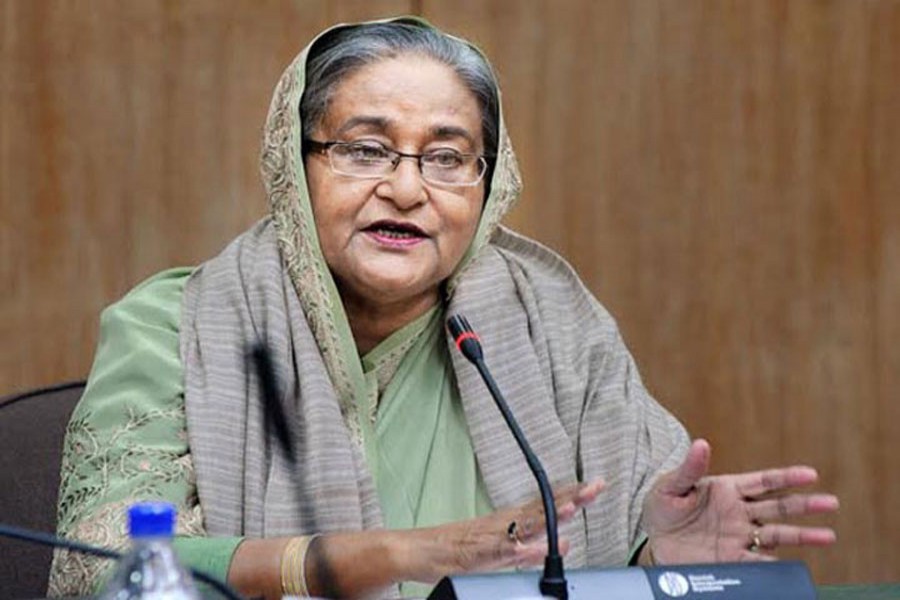 Prime Minister Sheikh Hasina came down heavily on BNP chairperson Khaleda Zia Thursday for the latter’s comments on Padma Bridge saying that she would not have uttered those words had she been in her senses.

According to her, "any person who has a little bit of sense, who has some knowledge, or who is in his or her senses must not have uttered those words."

She was speaking at a function at her official residence Ganobhaban when the leaders of Bangladesh Chhatra League (BCL) went to meet her marking the founding anniversary of the student body.

The BNP chief on Tuesday said the Padma Bridge will be risky to use as it is being constructed with patchworks and urged people not to use it.

She was speaking at a discussion at the Institution of Engineers, Bangladesh (IEB) arranged by Jatiyatabadi Chhatra Dal (JCD).

Hasina said if Khaleda had brains in her head she would have had an idea how a bridge is constructed.

"She (Khaleda) has brains in her head but that are used for making money through embezzlement, stealing orphans' funds, burn people, killing people. She [Khaleda] can only do these things."

Also the chief of the ruling Awami League, Hasina said by uttering these rubbish words Khaleda has made it clear that she has no capability to construct a bridge.

She asked the BCL leaders and activists to pay attention to study and said all subjects including science, technology, culture and literature have to be taught.

According to her, "You always keep in mind that education is most important to lead the country in the future. It's not possible to build yourselves without education. This is also applicable for advancing the country."

"You have to advance the country and this is the biggest thing for you," she said.

According to UNB, the Prime Minister said BNP and its allies had established an anarchic situation in the country through their misdeeds like arson attacks, burning people to death, as well as through looting and money laundering.

"They had only made their own fortunes when they were in power," said Hasina questioning how can they advance the country when they are unable to do anything for the welfare of people?

On the other hand, she said, her present government has created a congenial atmosphere in all educational institutions by handing over books to students instead of arms and money.

Referring to inhuman torture on and killing of the leaders of Awami League and Chhatra League by BNP in the past, the PM said they had also brought in power war criminals, rapists, killers and those who had handed over mothers and sisters to the Pakistani forces.

She regretted that generation after generation could not play this historic speech due prohibition though it was the number one speech among the most-inspiring 41 speeches in the world as well as one of the best in two thousand and five hundred years.

Hasina called upon the leaders and workers of Chhatra League to work together to uphold the international recognition as well as to go to their own villages to educate people, if anyone is left behind.