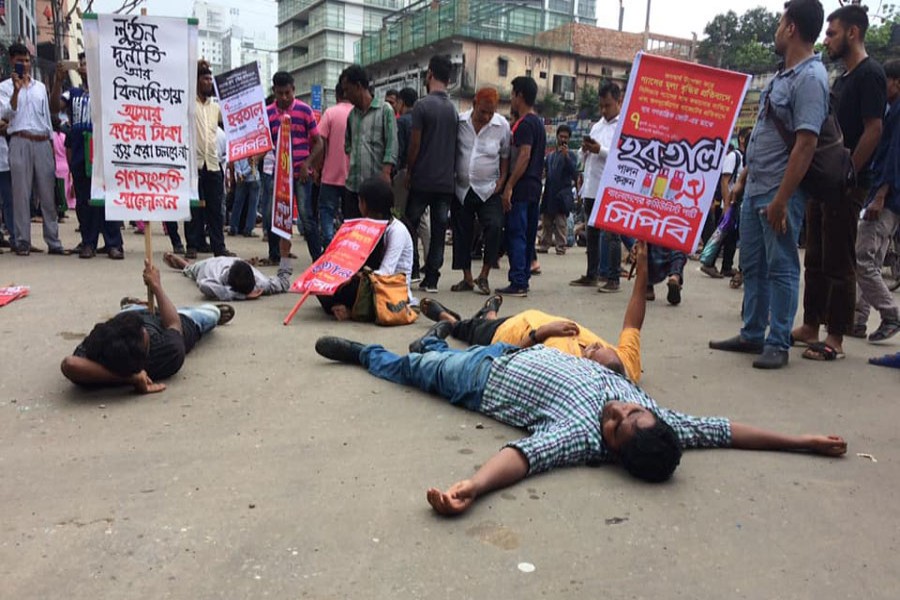 Activists of left-leaning political parties took position at Purana Paltan intersection, one of the bustling points in Dhaka city, protesting against a recent hike in gas prices during a half-day hartal across the country on Sunday. FE Photo

A half-day hartal has been enforced by the Left Democratic Alliance (LDA) across the country, including Dhaka city, to protest against the recent hike in gas tariffs.

Starting at 6:00am, the eight-hour half day hartal called by the LDA, a coalition of eight left-leaning political parties, ended at 2:00pm.

Around 9:00am, some protesters stopped a bus and broke its window glasses at Purana Paltan intersection, according to media reports.

Two of them were arrested by police only to be released 10 minutes later, the reports added.

At the beginning of hartal hours, the LDA leaders and activists took out a procession from Nightangle intersection and paraded around Purana Paltan, Zero Point and Press club areas.

Afterwards, they took took position atthe Purana Paltan intersection, creating traffic jam. However, they thinned out by 10:00am, leading to the smooth traffic movement.

The protesters again crowded at the intersection 15 minutes later, halting traffic movement at the busy intersection.

In between their protests taking position there until 2:00pm, they were seen thinning out a few times, easing traffic jam.

During the hartal, traffic movement at Shahbagh intersection also came to a halt as the demonstrators took position there until around 2:00pm.

A day after the government raised gas prices, the LDA on Monday last announced this shutdown for this day from 6:00am to 2:00pm.

BNP, Dr Kamal Hossain-led Gonoform and ASM Abdur Rab-led Jatiya Samjtantrik Dal are among other parties that endorsed the programme.

The National Committee to Protect Oil, Gas, Mineral Resources, Power and Ports have also expressed solidarity with the protests programme.