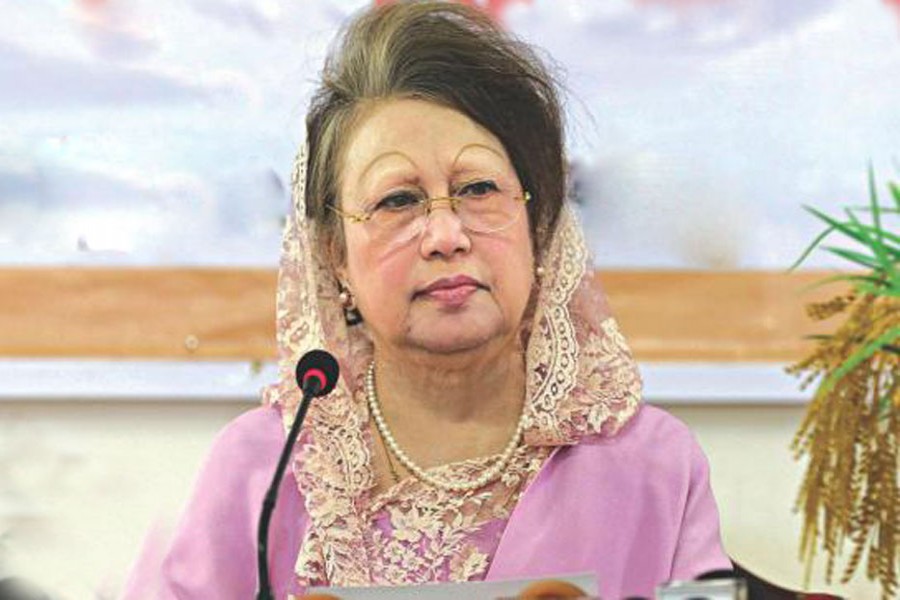 BNP Chairperson Khaleda Zia has said filing of 'false' graft cases is part of a conspiracy to make her ineligible for the next general election.

She came up with the remarks today while placing her self-defence statement before the special court at Bakshibazar in the capital in Zia Orphanage and Zia Charitable Trust corruption cases, reports UNB.

She alleged that the cases were filed in order to prevent her from doing politics, and to make her ineligible for the general election.

"Many ministers and ruling party men made various comments in media about me before the end of trial. Even a minister said I'll be sent to Kashimpur jail. Isn't it contempt of court?"

"I'm, therefore, in doubt weather I would get justice from the court," said the BNP chief adding, "It's their ulterior motive to annihilate me and my family from politics in a planned manner."

The BNP chief, however, said she still expects justice from the court. "I hope the court will ensure justice as per law rising above any influence. I'm repeatedly focusing on justice as people and we're in a serious doubt whether the justice will be ensured for me."

Khaleda said she does not think she is above the law. "But I'm a senior citizen, and I'll be happy enough if the rights of an ordinary senior citizen are ensured for me."

She said although there is no progress in many important cases, the cases filed against her are running in a rocket speed. "What's the motive behind it?

"I can't conclude my statements today as I'm now tired and sick. I'll talk more during the next hearing," the BNP chief said.

The court set November 9 as the next date for hearing since Khaleda could not finish her statements on the third day.

Earlier on Octover19, Khaleda started placing her self-defence statement in the case.

On July 3, 2008, the Anti-Corruption Commission filed the Zia Orphanage Trust graft case with Ramna Police Station accusing Khaleda Zia, her eldest son Tarique Rahman, and four others for misappropriating over Tk 21.0 million (2.10 crore) that came as grants from a foreign bank for orphans.

On August 8, 2011, the commission filed the Zia Charitable Trust graft case with Tejgaon Police Station accusing four people, including Khaleda Zia, of abuse of power in raising funds for the Trust from unknown sources.