Every vote will add to BD’s development, says Hasina 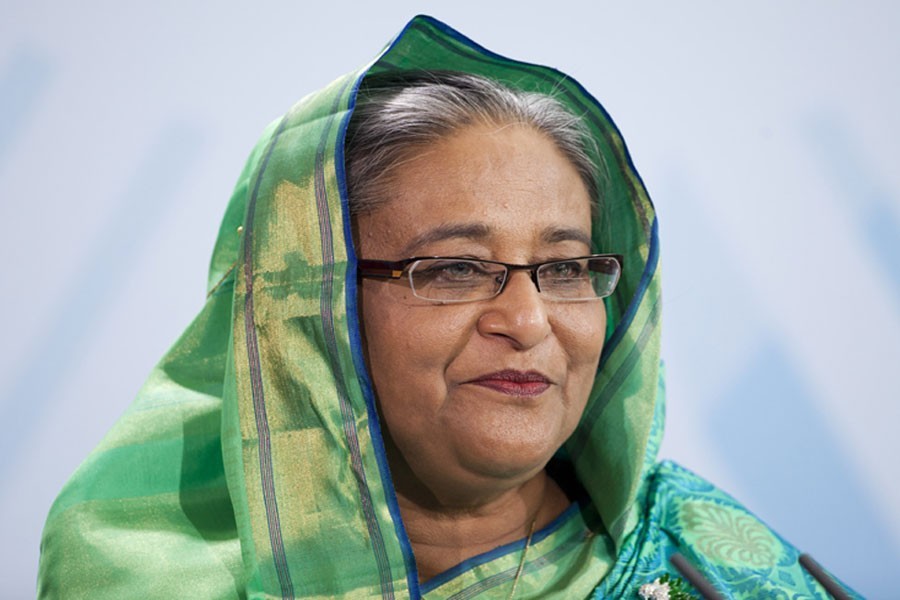 Awami League President and Prime Minister Sheikh Hasina on Thursday urged all to cast vote for her party to ensure a hunger- and poverty-free Bangladesh.

"Every vote is valuable and your one will help us form the government for the continuation of the country's development," she said while addressing a rally at Bhanga circle in Faridpur, reports UNB.

The Prime Minister was on her way to Dhaka from Tungipara as part of the party's second day of election campaign.

"If Awami League fails to return to power, the construction work on the Padma Bridge will be suspended. So, a single vote is also valuable for us," she said adding, "Cast your vote for Awami League-backed candidate Kazi Zafarullah, also an AL presidium member, for ensuring a hunger- and poverty-free Bangladesh."

"I'm seeking your vote... as you can understand how valuable your vote is for the continuation of development and to establish Bangladesh in the world arena as a dignified country," the Prime Minister added.

Through casting vote for 'Boat' Bangladesh became independent and gradually a hunger- and poverty-free country has been built, she said.

Referring to many development works carried out by her government, the AL President said, "We've become self-reliant in food, while the literacy rate in the country has increased... there has been a rise in power generation, too."

In 2001, she said, the BNP-Jamaat alliance took the country to the verge of destruction while they burnt people to death in 2014-2015.

Addressing another rally at Mahendra Stand in Daulatdia of Rajbari district, she said people have to cast vote for Boat to continue the pace of development. "It's important for Awami League candidates to win in all the seats. Keep it in mind while casting your vote."
.
The Prime Minister went on to say, "During the BNP-Jamaat period, there was rise in terrorism, militancy as people saw the incidents of 10-truck arms haul, 21st August grenade attack and serial bomb blast across the country. People across the country got terrified. The country was on the verge of destruction. Bangladesh also became champion in corruption for five times," she recalled.

"After forming the government, we've taken steps so that the country's people can lead a happy life," Hasina said.

Turning to social menaces, Hasina said, "Militancy, terrorism and drugs have to be eradicated from the country. We'll build a country which will be free from terrorism, militancy and drugs."

Addressing a public rally at Komorpur Abdul Aziz Institution ground during the party's second day of election campaign in Faridpur circle, Hasina said: "We don't want to go back to the dark era, we've started moving forward to the path of light and the journey will continue if you cast your vote for 'Boat'.

Sheikh Hasina, said, "BNP-Jamaat men had looted the assets of the country and ate up the money of orphans. They had come to power to kill people commit corruption. They can't do anything other than burning people and carrying out destruction."

Hasina will address more rallies at Manikganj bus stand, Rabeya Medical College and Hospital premises in Dhamrai and Savar bus stand on her way back to the capital.

Earlier in the day, Sheikh Hasina started her journey around 9:04 am by road from Tungirpara.

Before starting her journey, she recited from the holy Quran and offered munajat at the grave of Father of the Nation Bangabandhu Sheikh MujiburRahman.

On Wednesday, the Awami League President launched her party's election campaign through seeking vote for 'Boat' in the upcoming national election while addressing a public rally at Sheikh LutfarRahman Government Degree College ground at Kotalipara in Gopalganj.

Bangladesh is going to polls on December 30 next with the participation of all the major political parties, including Khaleda Zia's BNP that boycotted the last general election held on January 5, 2014.