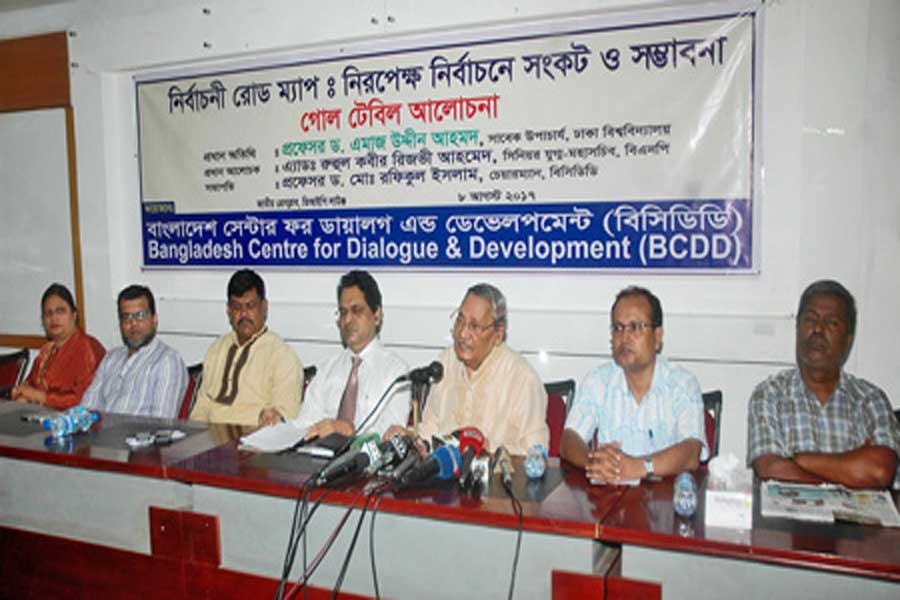 Prof Emajuddin Ahmed speaking at the discussion on 'The EC's roadmap and next election' organised by Bangladesh Centre for Dialogue and Development at the National Press Club in the city on Tuesday. — Collected

Prof Emajuddin Ahmed asked on Tuesday those who oppose army deployment in the national election to clarify the reasons behind it as he thinks only a strong Election Commission (EC) is not enough to hold a fair and neutral election in the country's current context, reports UNB.

He made the remarks while speaking at a discussion on 'The EC's roadmap and next election' organised by Bangladesh Centre for Dialogue and Development at the National Press Club in the city.

He also said a level-playing field must be created alongside dissolving parliament ahead of the 11th parliamentary elections for a credible election.

"The country's civil society members advocated for the engagement of army in the election. The national elections in 1991, 1996 and 2001 were free and neutral ones due to the deployment of army. They're also deployed during the natural disaster to serve people. What's the problem to involve them in the national election? Why shouldn't we take their help during the polls?" Emajuddin questioned.

Emajuddin, also a former VC of Dhaka University and a political scientist, said strengthening the EC is not the only condition to arrange the national election in a credible and impartial manner.

"An independent and strong Election Commission is a must for an inclusive and acceptable election. But, this is not the only important issue for the polls. There are some other matters that are to be addressed properly. A level-playing field will have to be ensured. The first condition to create the level-playing field is to dissolve the parliament. This system has also been kept in our constitution," he said.

Explaining the Article 123 of the Constitution, Emajuddin said parliament can be dissolved within 90 days of the fulfillment of its tenure. "The Prime Minister can't exert any influence during the polls if parliament is dissolved before the election."

He also said non-dissolution of parliament before 2014 election is an absurd and unusual incident.

Emajuddin said the EC should play a strong role in ensuring the political parties' equal rights to carry out their democratic activities.

For creating a level-playing field, he said, the Commission should take proper steps to keep 25,000 cases filed against BNP leaders and activists suspended until the election is held.