Eid-ul-Fitr being celebrated in the shadow of coronavirus 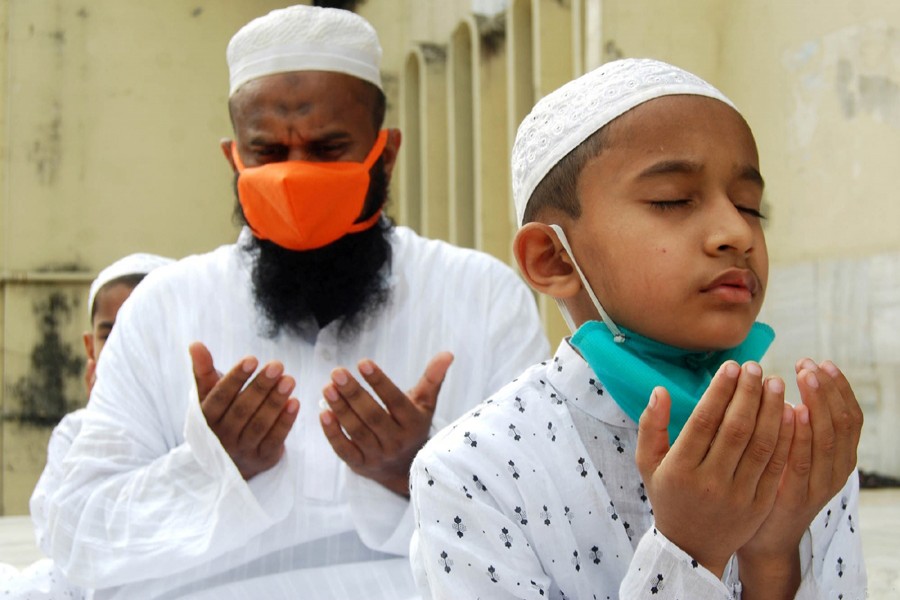 The holy Eid-ul-Fitr, one of the greatest religious festivals of Muslim Ummah, is being celebrated on Monday amid COVID-19 (coronavirus) situation across the country.

The Eid festival is being celebrated in line with the government’s directives including maintaining physical distancing, avoiding mass gathering and abiding by the health rules as the country, like other world states, is at risk of the fatal coronavirus outbreak.

Although the Eid should be celebrated with due solemnity, fervour and gaiety as the holy Ramadan, the month of fasting and abstinence, came to an end, but people have to remain themselves confined in houses after saying Eid prayers at only their nearest mosques in their vicinities.

The very auspicious occasion began with the sighting of the Shawwal moon last night and reached the climax this morning amid offering the Eid-ul-Fitr prayers by millions from all strata of life only at mosques in the capital and elsewhere across the country.

Eid-ul-Fitr is an Arabic word meaning “festival of breaking of the fast”. The festival marks the end of the Muslim fasting month of Ramadan, the ninth month of the Islamic calendar. Muslims abstain from eating and drinking from dawn to dusk during the holy Ramadan.

On the Eid day morning, Muslims gather at mosques and prayer venues to perform Eid prayers and greet each other. The festival is usually celebrated by visiting friends and relatives, hosting food parties and sharing sweets. Children not only get new clothes and shoes, but also receive cash gifts called “Salami” from their elders, relatives and well-wishers.

The occasion is seen as a time of forgiveness and of giving thanks to Allah for helping people complete their month-long spiritual fasting. Many Muslims distribute cash and food to the less fortunate ones.

But, this year, the Eid-ul-Fitr is being celebrated in a different outlook as the government has imposed a strict restriction on all the social gathering and urged the Muslim devotees to celebrate the Eid with only family members indoors instead of visiting relatives’ houses and outing around in the wake of the global COVID-19 pandemic.

The Dhaka Metropolitan Police (DMP) on Friday issued a 14-point instruction for Muslim devotees and mosque committees in observance of the Eid-ul-Fitr.

It called upon the city dwellers to celebrate the Eid-ul-Fitr with family members at home and advised all to refrain from visiting relatives, neighbours, and entertainment spots in the city in a bid to contain the spread of deadly virus.

The instruction also said devotees would have to perform ablution from home before coming for Eid prayers, instead of using ablution room of the mosques.

Earlier, on May 14, the Religious Affairs Ministry issued a circular asking the authorities concerned to hold Jamaat of the Eid-ul-Fitr at nearby mosques instead of Eidgahs or open spaces aiming to contain the spread of coronavirus.

The authorities concerned also urged the Muslim devotees not to embrace each other after Eid-ul-Fitr prayers, which is the common scenario of the Eid festival to exchange greetings.

In line with the government directives, Dhaka north and south city corporation decided not to hold any Eid jamaat (congregation) on the open spaces, including at the National Eidgah on the High Court premises, in the capital.

Besides, the historic Eid jamaat at the Sholakia Maidan in Kishoreganj has also been cancelled this year amid the COVID-19 situation.

However, five Eid jamaats were held at the Baitul Mukarram National Mosque today like every year, according to Islamic Foundation.

The first Eid jamaat was held at 7:00am followed by other four congregations at the same venue to help the devotees perform Eid prayers maintaining the social distancing and health guidelines properly.

The second, third, fourth and fifth Jamaats were held at 8:00am, 9:00am, 10:00am and 10.45am respectively while separate Khatibs of the national mosque conducted those.

Against the backdrop of ongoing global crisis due to the pandemic COVID-19 (Coronavirus) outbreak, the traditional Eid prayers with the spontaneous participation of people from all walks of life in capital’s National Eidgah Maidan was cancelled earlier.

President’s Press Secretary Mohammad Joynal Abedin told BSS that the head of the state offered prayers of Eid-ul-Fitr, the greatest religious festival of Muslims, with his family members and some important officials at the Durbar Hall of Bangabhaban.

A special munajat was offered seeking divine blessings for peace and progress of Bangladesh and welfare of the people as well as the Muslim Ummah.

Du’a was too offered seeking eternal peace of the departed souls of Father of Nation Bangabandhu Sheikh Mujibur Rahman and other martyrs who sacrificed their lives for the sake of the county and its people in different democratic movements, particularly during the Liberation War in 1971.

After the prayers, President Hamid spent time with his family members at the Presidential palace.

On the occasion of the Eid-ul-Fitr, Bangladesh Television, Bangladesh Betar and other private TV channels are airing special programmes.