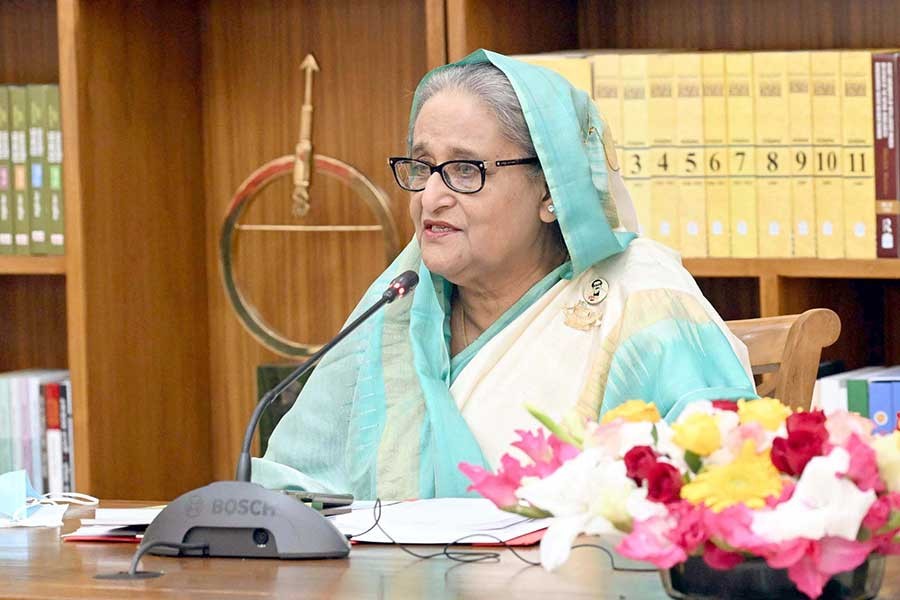 Prime Minister Sheikh Hasina on Saturday expressed her optimism that people would not have to suffer much for electricity and fuel from the next month.

“Due to the war in Ukraine, it is difficult to buy fuel oil and procure gas. Not only our country but also the UK, America, Germany - everywhere - they are looking at saving energy. . .  So, we had to suffer for some days. Inshallah, there will be no more suffering from next month,” she said.

The premier expressed this optimism at a meeting of the Awami League Advisory Council at her official residence Ganabhaban, according to BSS.

Urging everyone to maintain austerity, Sheikh Hasina, also the president of the ruling Awami League, said, “I would tell all that they should exercise austerity in using oil and water. Be frugal, because there is economic recession all over the world. We are not free from its impact.”

Reiterating her call to increase production, she said, "I have called upon all of you that as we have land, so one inch of land should not be left vacant rather produce whatever you can, even at the rooftop gardens.”

Mentioning that the economic situation across the world is very bad, she said, “If we can increase our own production, we will never have to face famine in Bangladesh. This is the reality. We have to do it for ourselves.”

Stating that the production in the country is more than the requirement, the head of government said, “We are finding ways… We have increased food production. We are producing more than what we need. We always keep more food in stock for emergencies so that the people of my country don’t suffer.”

Talking about providing free and low-cost food to people, she said, "We are buying all the things at a high price and providing those to people at a low price so that none suffers from food shortages."

According to bdnews24.com, the prime minister described the functional democratic process as the driving force behind Bangladesh's economic growth over the past decade. She also brushed off allegations of authoritarianism levelled at the ruling party by its political opposition.

"They [opposition parties] are agitating for the establishment of democracy, but the Awami League came to power through an election in 2008 and the democratic process has continued ever since," Hasina said.

"The country has progressed and that wouldn't have been possible [without a democratic process]."

The democratic process in Bangladesh started with the Awami League's ascent to power, prior to which, the people did not have 'real democratic rights', according to the prime minister.

"Transparency and accountability created in the electoral process today are the results of our movements and struggles."

Comparing her terms of governance to that of the BNP, Hasina said, "Since the BNP formed a new government with Jamaat-e-Islami, there wasn't a single crime they didn't commit, be it murder, enforced disappearances, militancy, terrorism, corruption and money laundering."

Hasina also hit out at the BNP's 'clamours' for democracy, accusing the party of electoral breaches, including voter fraud and ballot box sealing. "When it comes to elections, you don't have to look too far back. One only needs to be reminded of the 2001 elections or the by-elections to Magura, Mirpur or Dhaka-10 to see what the BNP did in the name of elections."

Bangladeshis were stripped of their democratic rights when those involved in Bangabandhu Sheikh Mujibur Rahman's brutal assassination seized power in violation of the constitution.

“There was no such thing as an election at that time. A party was later formed from the pockets of the military junta at the cantonment which legitimised an illegal power grab through a two-thirds majority in parliament. This marked the beginning of the process of voter fraud."

Highlighting the strides taken by Bangladesh on the Awami League's watch, Hasina said, "Bangladesh has achieved success in every field, including the improvement of socio-economic conditions, literacy rate, average life expectancy and poverty reduction.”

"The goal of the Awami League is to ensure the welfare of the people.”