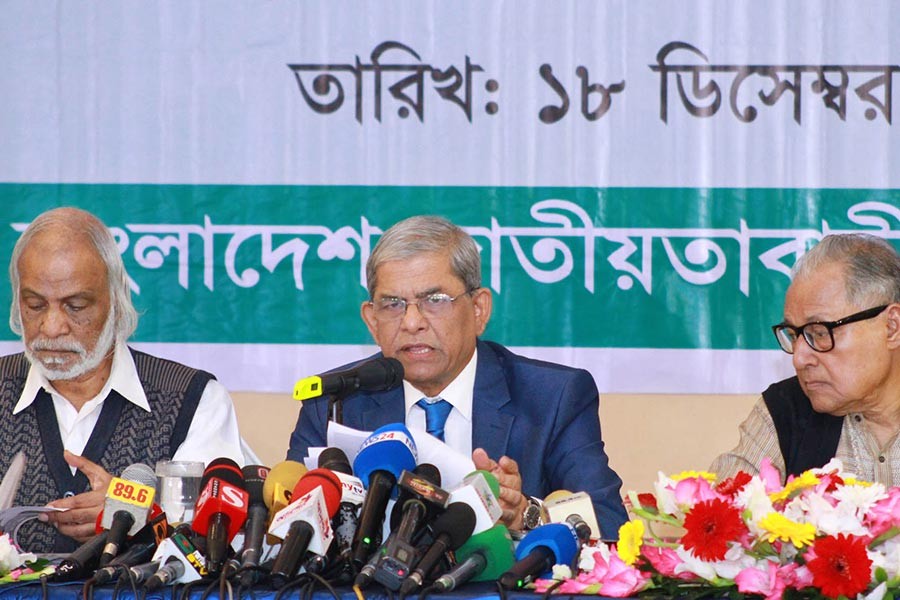 The BNP has avoided the issue of war crimes trials in its election manifesto, which was announced on Tuesday ahead of 11th parliamentary election.

The party's manifesto did not make any promise to continue the trials of 1971 war criminals if the party get mandate to form government, reports bdnews24.com.

The Jatiya Oikya Front, the opposition alliance of which the BNP is the largest member, has promised to keep the trials going if it comes to power. The BNP announced its own manifesto a day after the Oikya Front.

In the Kamal Hossain-led Oikya Front’s manifesto it was stated that the trials of war criminals would continue.

Awami League leaders rubbished the promise, pointing out that the alliance were fielding candidates from Jamaat-e Islami under its symbol.

BNP Secretary General Mirza Fakhrul Islam Alamgir, who had attended the announcement of the Oikya Front manifesto, unveiled his party’s manifesto on Tuesday.

Though it was similar in many respects to the Oikya Front manifesto, it did not discuss the matter of war crimes trials.

The Awami League had come to power in 2008 after promising to try those who committed war crimes during Bangladesh’s Liberation War. The BNP opposed the trials.

The death sentence of Salauddin Quader, a member of the BNP’s highest forum, the National Standing Committee, was carried out after he was convicted by the war crimes tribunals.

Many other party leaders, including Abdul Alim, have been sentenced to jail on the charges.

Many allies of the BNP, such as Jamaat chief Motiur Rahman Nizami and Jamaat leaders Mohammad Mojaheed, Abdul Quader Molla, Md Quamruzaman and Mir Quasem Ali, have also been put to death after their convictions on war crimes charges.

Ghulam Azam Delwar Hossain Sayedee and other Jamaat leaders have been sentenced to prison.

Several of the BNP candidates for the 11th parliamentary election are close to sentenced war criminals. Members of Jamaat-e Islami, the political party that had opposed Bangladesh’s Liberation War, are running under the paddy sheaf symbol.

The BNP has long said that the trials are motivated by politics and that they would try the ‘true war criminals’ if they came to power.

But the sections of the manifesto issued to journalists and read aloud by Mirza Fakhrul Islam Alamgir did not mention war crimes.

Asked about the matter during the press conference, Mirza Fakhrul said: “I have said all I have to say. You will find the rest in the details. The full manifesto will be on our website.”

The manifesto was not available on the BNP’s website on Tuesday afternoon.

According to the ‘Liberation War and Freedom Fighters’ section of the BNP manifesto, all freedom fighters will be granted the status of ‘state-honoured citizens’ if the party takes power. The BNP also says it will end the corruption involved in the freedom fighters lists.

A proper list of freedom fighters would be formed and they would be granted the proper ranks and state honours, it said.

Though the BNP had called for the establishment of the Ministry of Liberation War Affairs, it had appointed an accused war criminal to lead it. A court verdict had called the decision a ‘slap in the face’ to Liberation War martyrs.