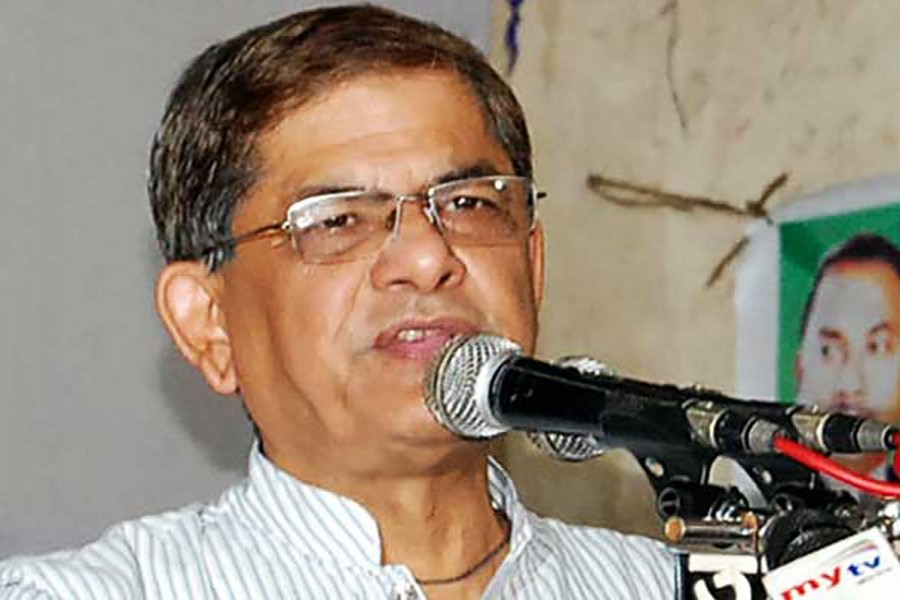 "Filing cases against its opponents is their (AL's) old habit. They'd carried out the incident and now filed the cases against us. I've got surprised as no case is filed against you (journalists) as you're assaulted and your vehicles damaged," he said.

Fakhrul came up with the remarks at a press conference at BNP's Nayapaltan central office while giving his party's reaction to the filing of two cases by police over the violence on Dhaka-Chittagong highway in Feni on Khaleda Zia’s motorcade.

The BNP leader said journalists witnessed what happened in Feni.

"You (journalists) are the victims of the attack. Various newspapers also published the photos, names and addresses of the attackers," he said.

He said the government should have apologised for the incident and put the offenders on trial by identifying them.

"But they (govt) couldn't come out of their old dark ways, and they're now trying to confuse people by spreading lies."

Nineteen leaders and activists of BNP were arrested in two cases filed by police over the two incidents of attacks, reports UNB.

Of the arrestees, 13 BNP men were arrested in a case filed over torching two buses on Dhaka-Chittagong highway while the convoy of BNP chairperson Khaleda Zia was passing through Mahipal of Feni on October 31.

Besides, Feni Model Police Station officer-in-charge Rashed Khan Chowdhury said police arrested six people in another case filed for attack on Khaleda's motorcade in Feni on her way to Cox's Bazar on October 28.

Reacting to AL general secretary Obaidul Quader's remark that BNP has stopped the door of negotiation by resorting to violence in Feni, Fakhrul said the ruling part leader's comment has exposed that their party does not want democracy and a fair election.

"Awami League would have engaged in talks with the opposition parties had it wanted democracy to be restored."

The BNP leader said Awami League is unwilling to hold discussions with BNP as the party knows it very well if a fair election is held through talks, the party won't be able to return to power.

About their party's stance on political negotiations, he said their party has long been calling for reaching an understanding over the next polls through talks as it does not want violence in the country.

"The government must sit in talks, no matter what Obaidul Quader is now saying."