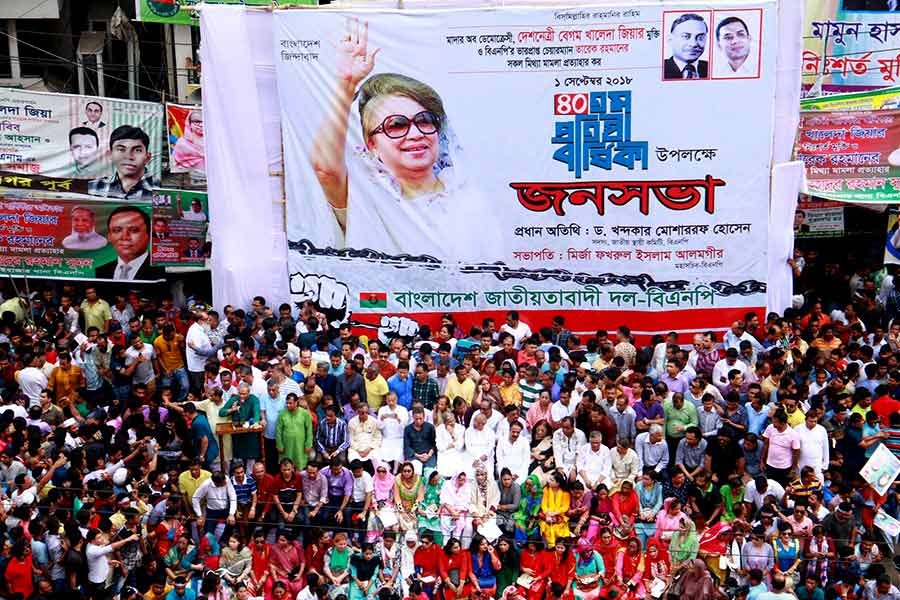 Senior leaders of BNP have urged all, other political parties, to forge a greater unity to 'restore' democracy.

They made the call while addressing a public rally marking the 40th founding anniversary of BNP in front of its Nayapaltan central office on Saturday.

Hundreds of leaders and activists of the party and its associate bodies joined the rally, reports UNB.

The leaders also demanded the government release BNP chairperson Khaleda Zia and all political prisoners after withdrawing the 'false' cases filed against them to create an atmosphere for an inclusive and meaningful election.

"I would like to urge the people of all walks of life, all democratic parties and institution, let's save the country and democracy putting aside all the misunderstandings and conflicts," said BNP secretary general Mirza Fakhrul Islam Alamgir.

Fakhrul said Khaleda made a call for a national unity before going to jail.

Fakhrul also said the government must take steps for releasing BNP chairperson Khaleda Zia and ensure her better treatment as she is very sick.

The BNP leader renewed their party's some demands for holding the next election in a fair and credible manner.

"Before the announcement of the election schedule, this government must quit, parliament must be dissolved and the Election Commission will have to be reconstituted," Fakhrul said.

He also demanded the government give the army the charge of conducting the national election.

Fakhrul alleged that the government is making various plots to hang onto power as people are not with it.

"Now, they're trying to use EVMs in the polls to perpetuate its power as people won't protect them. People have abandoned Awami League and it has now turned into a politically bankrupt party," he alleged.