'Street movement soon for her release' 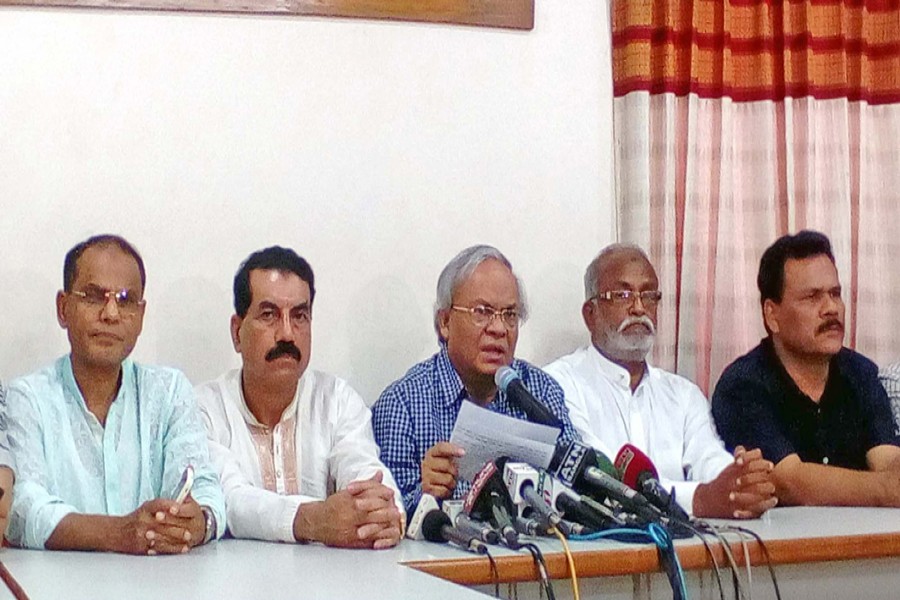 BNP on Sunday opposed the government's decision to send their chairperson Khaleda Zia to Bangabandhu Sheikh Mujib Medical University (BSMMU) as it thinks her proper treatment is not possible there, reports UNB.

Speaking at an emergency press conference at the party's Nayapaltan central office, party senior joint secretary general Ruhul Kabir Rizvi renewed their demand for ensuring her treatment at United Hospital in the capital.

The BNP senior joint secretary said, "We think her proper treatment is not possible at the PG hospital. So, we urge the government once again to provide her treatment at the United Hospital."

Justifying their demand, Rizvi said Khaleda had long been receiving treatment and undergoing medical checkup at the United Hospital before she was sent to jail.

Besides, he said, "The hospital has all modern and sophisticated medical equipment by which her proper and error-free health diagnosis is possible."

Earlier on the day, Law Minister Anisul Huq and Home Minister Asaduzzaman Khan said Khaleda will be sent to BSMMU on the day for medical tests as her personal physicians claimed she had suffered a 'mild stroke' in jail.

They, however, did not exactly say at what time she will be taken to the BSMMU as it depends on jail authorities.

On Saturday, Khaleda's four personal physicians examined her health at the Old Central Jail and said she might have suffered a mild stroke.

Since March 29, the BNP has been claiming that their chairperson's health condition is very critical, citing it as one of the reasons to demand her immediate release.

Khaleda Zia was sent to jail on February 8 last, now coming up to four months after a special court sentenced her to five years' rigorous imprisonment in the Zia Orphanage Trust graft case.

Ruhul Kabir Rizvi warned that BNP leaders and activists will take to the streets with a short notice if their party chief Khaleda Zia is not released from jail before the upcoming Eid-ul-Fitr.