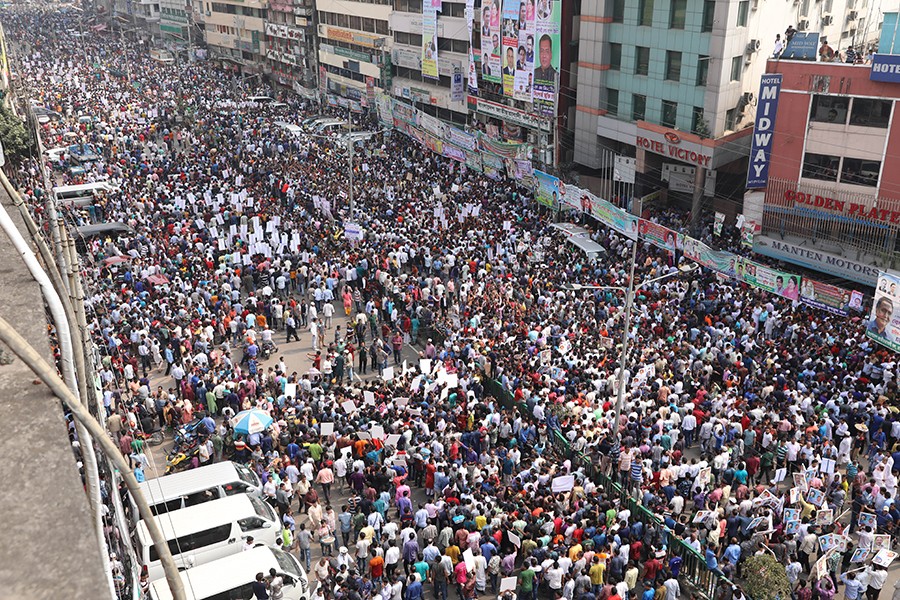 A fierce clash broke out between police and BNP leaders and activists in front of the party's Naya Paltan Central office in Dhaka on Wednesday, disrupting traffic in the areas.

Witnesses said BNP standing committee member Mirza Abbas along with his several hundred supporters marched towards their party office around 12:30pm and started staging a showdown there, halting traffic on the road.

Police tried to remove the BNP men from a portion of the road so that vehicles can pass through, but failed to do so.

At one stage, they locked into an altercation with the BNP leaders and activists and started charging batons to maintain the law and order, according to a UNB report.

BNP leaders and activists also started hurling brickbats at the cops, triggering a fierce clash between the two sides.

A chase-and-counter-chase was going on there till filing of the report around 1:25pm. Police also lobbed teargas to disperse the BNP activists.

The unruly BNP men then torched a police van and vandalised some other vehicles at the Naya Paltan area.

BNP Assistant Office Secretary Taiful Islam Tipu said that the clash broke out around 12:55pm as the police were trying to obstruct their leaders and activists from gathering in front of their office.

Traffic in the areas came to a complete halt following the clash.