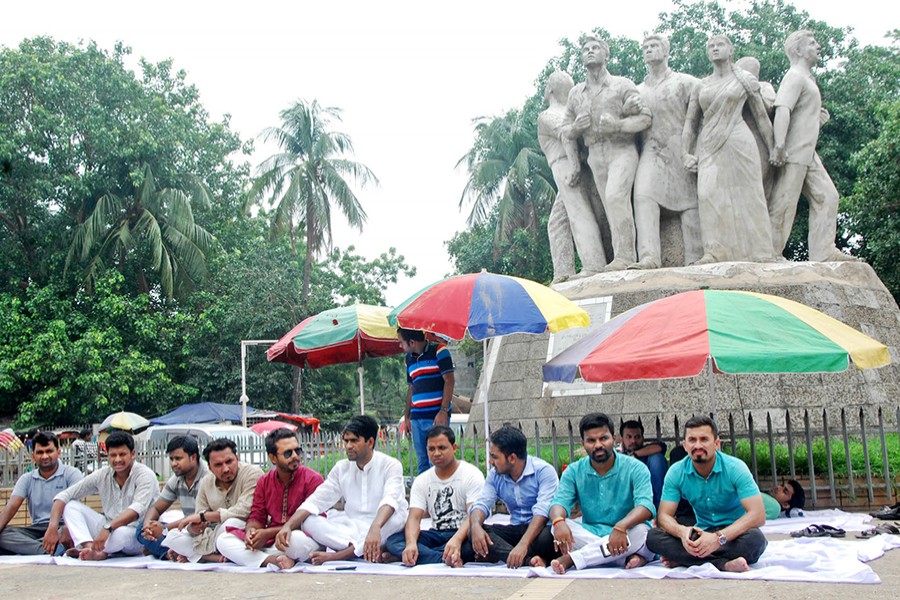 A group of Bangladesh Chhatra League (BCL) leaders, who were allegedly overlooked for posts in the central committee of the ruling party’s student wing, seen in a sit-in protest in front of Raju Sculpture in Dhaka University — Focus Bangla file photo

Without naming the removed leaders, the announcement said the posts will be filled up after scrutiny.

In a separate statement, the ruling party’s student affiliate announced withdrawal of suspension on Zarin Diya, a former member of the central committee.

Diya was among five disciplined on May 20 over a fight at the Madhu’s Canteen after the fully fledged committee of 301 was formed on May 13, a year after the organisation’s initial committee had been formed through its national council, reports bdnews24.com.

Several activists claimed inclusion of controversial members, including married ones and those with criminal cases against them, has left snubbed or handed them undesired positions in the new committee.

The protesters had called for the immediate removal of controversial members inducted into the committee but were attacked as they attempted to hold a media briefing at the Canteen.

The 'overlooked' leaders had subsequently resorted to different forms of protest against the assault.

Later, the Chhatra League top brass promised to look into the demands of the protesters and urged the disgruntled activists to call off their protest.

The organisation had said initial investigations found 17 leaders ineligible to remain in the central committee.