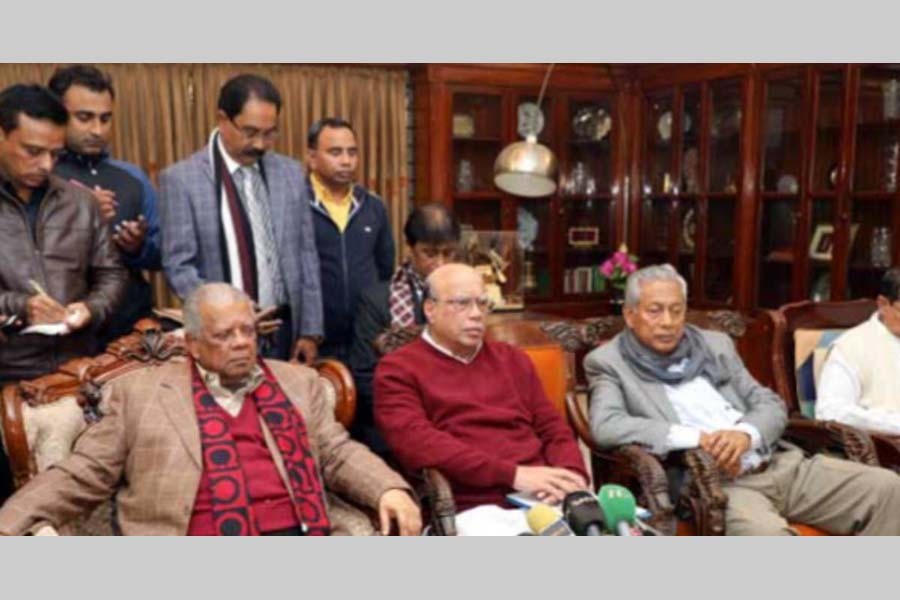 The Awami League-led 14-party alliance on Saturday demanded that the City Corporation (Election Code of Conduct) Rules 2016 be amended to pave the way for MPs to join electioneering for candidates in city corporation elections, particularly in the polls to two Dhaka cities slated for January 30.

"According to the law, MPs can’t take part in electioneering ...we’re saddened at this. We think this law needs to be changed," spokesman of the alliance Mohammad Nasim, MP said.

Nasim, also AL presidium member, was talking to reporters after a meeting of the 14-party alliance held at his Dhanmondi residence.

"All the BNP leaders from top-to-bottom can participate in the election campaign.  But we’ve to comply with the code of conduct formulated by the Election Commission (by refraining from joining the campaign),” said the AL MP.

Echoing Nasim, AL Advisory Council member Amir Hossain Amu, MP said though it is a local body election, there is no scope for all to join electioneering as it is a non-partisan one.

"The Election Commission said MPs can’t join campaign in city elections. This is very sad,” he said urging the EC to scrap the legal bar to the MPs.

Amu said the elections to the DNCC and DSCC are important for their party as ‘anti-liberation’ forces are also contesting there. “So, we can’t sit idle in our residences under this circumstance.”

A councillor candidate, who works for a party contestant during the general election, will not be able to get any favour from this very MP in return, Amu lamented.

Nasim said the 14-party alliance has to work in unison to ensure the victory for AL candidates -- Atiqul Islam in DNCC and Sheikh Fazle Noor Taposh in DSCC.

As per the electoral code of conduct, the very important persons enjoying government privileges cannot participate in the city election campaign.

In the City Corporation (Election Code of Conduct) Rules 2016, the Prime Minister, the Speaker of the Jatiya Sangsad, ministers, the chief whip, deputy speaker, the opposition leader in Parliament, the deputy leader of the parliament, the deputy opposition leader, state ministers, whips and deputy ministers or persons with the equivalent status, MPs and city mayors are defined as the very important persons enjoying the government privileges.