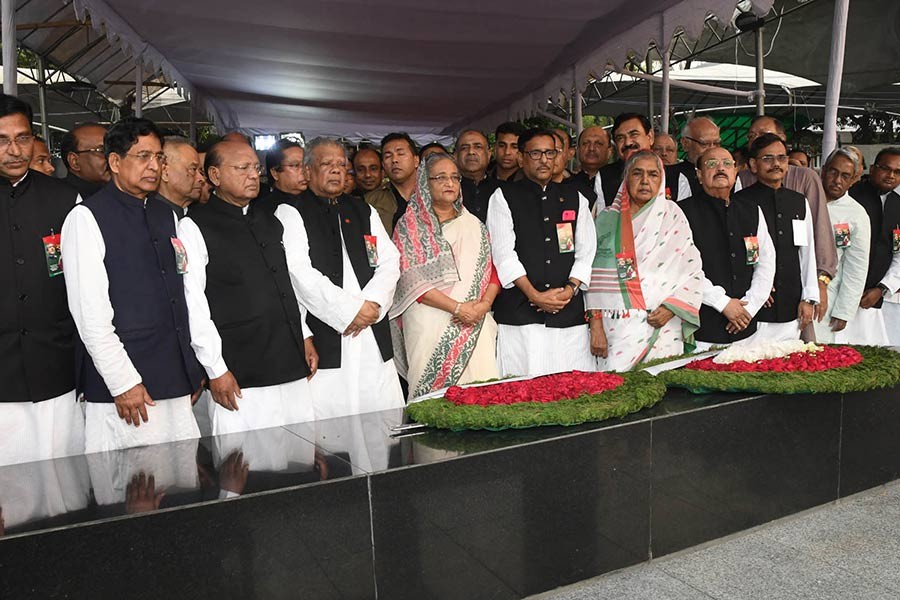 Prime Minister Sheikh Hasina paid homage to Bangabandhu by placing wreaths at his portrait in front of Bangabandhu Memorial Museum at Dhanmondi on Monday.

According to BSS, the Awami League chief laid another wreath at the portrait of Bangabandhu on behalf of her party, flanked by central leaders.

The surroundings of Bangabandhu Bhaban at Dhanmondi wore a festive look as a leaders and activists of Awami League, its associate and likeminded bodies thronged there to pay homage to the architect of independent Bangladesh.

Marking the Independence and National Day, national and party flags were hoisted atop of Bangabandhu Bhaban, party's central office and offices across the country in the dawn.

Awami League leaders and workers paid tributes to Liberation War martyrs by placing wreaths at the National Memorial at Savar at 6am.

A discussion will be held in Krishibid Institution auditorium in Dhaka at 3.30pm on Tuesday.

Awami League General Secretary and Road Transport and Bridges Minister Obaidul Quader urged all leaders and workers of Awami League and its associate bodies, well-wishers and all walks of people to join the programme.