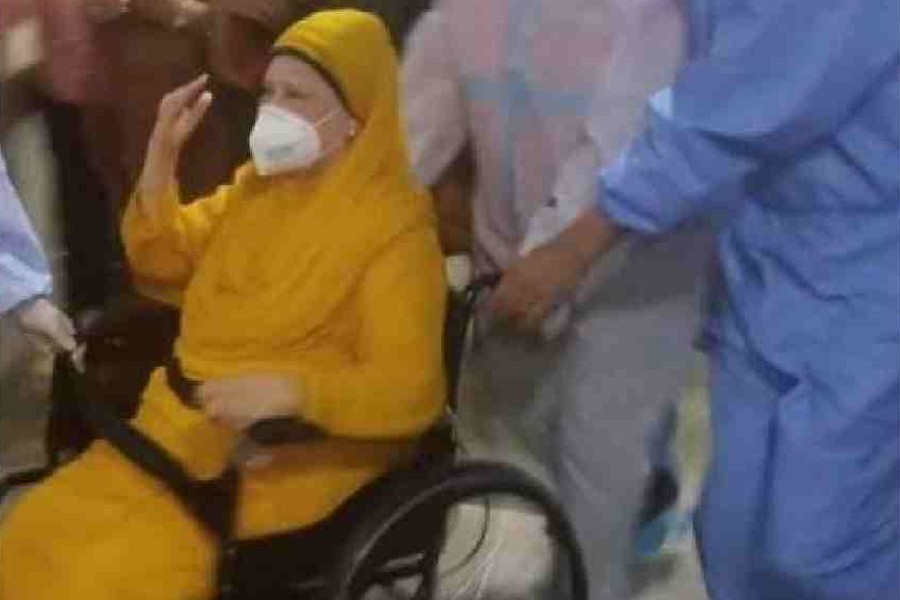 A 10-member medical board was formed on Wednesday for the treatment of BNP Chairperson Khaleda at Evercare Hospital in the capital.

She was admitted to the hospital on Tuesday night.

“A 10-member medical board with seven physicians from Evercare Hospital and three others from her medical team, including Dr FM Siddiqui, me, and Dr Al Mamun, was formed today (Wednesday),” said Khaleda’s personal medical team member and BNP vice-chairman Dr AZM Zahid Hossain.

Speaking at a press conference at BNP chairperson’s Gulshan office, he said the medical board reviewed the reports of her tests that have so far been conducted.

He said the medical board also added some new drugs  to the prescription that the BNP chief was following during her treatment at her residence for Covid infection and other complications. “Alhamdulillah, she (Khaleda) is now doing well.”

Zahid said some of the tests suggested by the medical board will be done on Wednesday while the rest on Thursday. “On completion of the tests, the overall treatment plan for Madam (Khaleda) will be made after reviewing all the reports.”

The medical board was formed headed by Evercare Hospital’s Prof Shahabuddin Talukder.

Zahid, also one of the members of the 10-member medical board, said they are very hopeful about taking the BNP chief back to her residence soon. “But we could not say the specific time or make any prediction about her release before reviewing her all reports.”

He urged the country’s people, including BNP leaders and activists, to pray for the quick recovery of 76-year-old Khaleda, reports UNB.

The physician said alongside a fresh CT scan, the BNP chief underwent some other tests, including ECG and Echo on Tuesday night

“We found minimum infections in her lungs in the first report of the CT scan. But her fresh CT scan conducted yesterday (Tuesday) suggests she has no infection in her lungs. No cardiac problem has also been detected in her test report. “It’s a good sign,” he added.

Zahid said the BNP chief has been receiving treatment at a non-corona unit of the Evercare Hospital as she has no Covid symptom.

"As per the international medical rules, if a patient does not have any symptoms after two weeks, then there is no need to do a corona test, and we can assume that there is no chance of spreading corona infection by her.”

He said Khaleda has long been suffering from some health complications, including arthritis, diabetes and eye problems.

He said Khaleda’s family members long ago sought permission from the government for taking her aboard for treatment.

Asked whether the fresh tests are being done to create a ground for sending her abroad, Zahid replied in the negative, saying her health checkup is necessary based on reality.

He said the BNP chief could not go through some necessary tests for over a year as he could not go to any hospital. “There’re some post-Covid complications that may flare up later. Considering all these things, we think she needs these tests.”

On Tuesday midnight, Khaleda, infected with coronavirus, was admitted to the Evercare Hospital temporarily for her thorough health checkup.

Doctors said her fresh CT scan report conducted on Tuesday suggests that she made a good recovery from Covid as she has no symptom of the virus.

Earlier on April 14, Khaleda was taken to the Evercare Hospital for the CT scan and later doctors said a very nominal infection was found in her lungs.

Khaleda Zia tested positive for Covid-19 test on April 10 as eight people at her residence were infected with the virus.

She underwent the second Covid-19 test on April 24 and her report was positive.

Amid the coronavirus outbreak, the government freed Khaleda Zia from jail for six months through an executive order suspending her sentences on March 25 last year.

She was released from the prison cell of Bangabandhu Sheikh Mujib Medical University (BSMMU) the same day, and she has been staying at her Gulshan house since then.

On August 27 last year, the government extended her release for six more months and it was extended again for six months on March 15 last.

On February 8, 2018, Khaleda was sent to the Old Dhaka Central Jail after a lower court sentenced her to five years’ imprisonment in Zia Orphanage Trust corruption case. The High Court later doubled her jail term.

Khaleda was found guilty in another corruption case the same year. Her party claims both the cases are politically motivated.