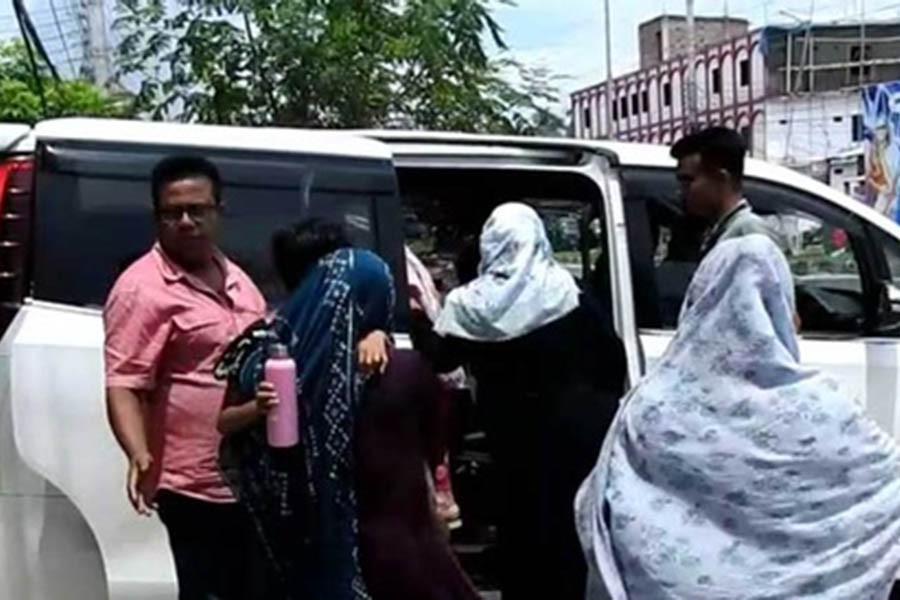 The Police Bureau of Investigation has questioned the minor son and daughter of former superintendent of police Babul Akter and his murdered wife Mahmuda Akter Mitu in Magura.

PBI Inspector Abu Zafar Mohammad Omar Faruq, who is investigating the case, interviewed the 12-year-old boy and his 7-year-old sister in the presence of Babul's father Abdul Wadud, a retired police inspector, at the district social service office on Monday.

Babul, who started a murder case after Mitu's killing in 2016, is himself in jail as the prime suspect. Their children stay with his parents in Magura now.

His brother, lawyer Habibur Rahman Labu, alleged that the investigating officer went outside and spoke on the phone during the testimony in violation of a High Court order. Abu Zafar also allowed extra people in the room, Habibur said.

The PBI inspector refuted the allegations. Magura Social Services Officer Arshadul Islam said he assisted in the interview as per the directions of the court, according to bdnews24.com.

Mitu was taking the boy, who was 7-year-old at the time of the incident, to school in Chattogram when she was hacked and shot dead on Jun 5, 2016.

Abu Zafar said the boy skipped questions about Babul, saying he could not remember or he did not know about it. "The boy has been with his grandfather [Babul's father] for a long time. It appears he was told what to say."

Wadud, Babul's father, said it was "inhumane to question children for three hours".

Defending his son, the former police officer said, "My son was an honest, strong and just police officer. He won the president's police medal five times. He has been framed in this case as part of a conspiracy.”

He demanded the arrest of the accused Kamrul Islam Sikder Musa. "The mystery will be solved only if he is arrested."

When Babul was working in Chattogram Police, Musa was his source.

Police say Musa is missing, but his family alleged that a few months after Mitu was murdered, the law enforcers picked him up and he has not been heard from since.

Babul resigned from the force three months after Mitu's murder as her parents started to point the finger at him. He also married again later.

In May last year, the PBI reported that it found evidence directly linking him to the murder.

It also hinted that Babul had killed his wife because of his relationship with another woman.

Mitu’s father Mosharraf Hossain, who is also a former police officer, initiated a new case against his son-in-law and eight others five years after the incident.

Babul was arrested in that case and sent to jail. However, due to legal complications, the court is hearing the case started by Babul.