Police file case against 200 to 300 SUST students over clash 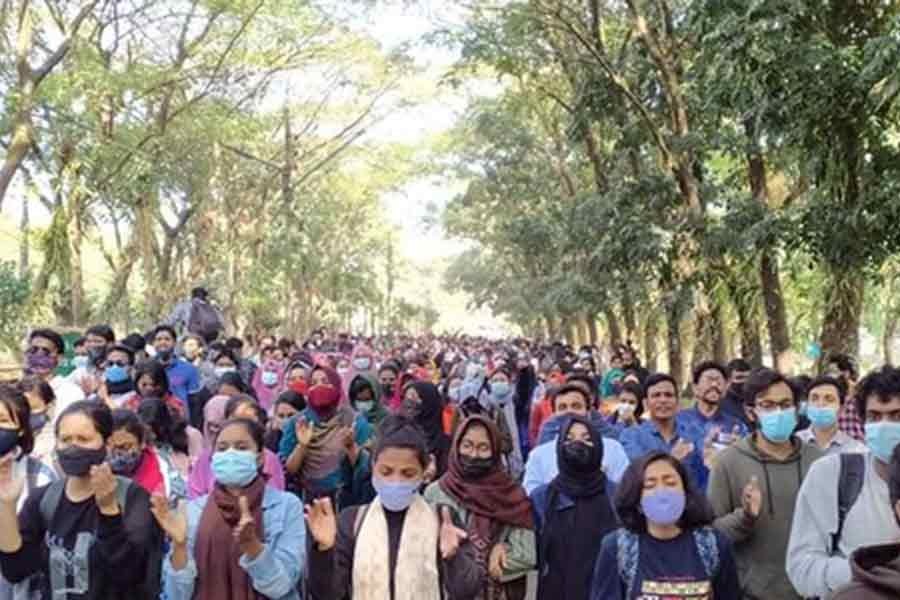 A case has been filed against 200 to 300 unnamed students of Shahjalal University of Science and Technology (SUST) on charges of obstructing police from performing their duties and attacking them.

According to the case statement, the SUST students were staging demonstrations on Sunday to press home their three-point demand, including the resignation of Jafrin Ahmed, provost of Begum Sirajunnesa Chowdhury, and confined VC Farid Uddin Ahmed to a room.

The students reportedly obstructed police from performing their duties around 5.30 pm when they went there to rescue the VC. Around 200 to 300 students suddenly attacked the policemen and tried to snatch the firearms of police. They threw brickbats at the police and exploded cocktails, creating panic on the campus, according to the case statement.

Later, police opened fire and exploded 21 sound grenades to bring the situation under control, it said.

Meanwhile, the students continued their demonstrations for the 6th day demanding the VC’s resignation and protesting the police action on them.

They gathered at Golchattar point of the campus Tuesday noon rejecting the notice of shutting down the university for an indefinite period and leaving the halls.

They will continue their protests until the VC resigns, said one of the protesting students.

They also collected mass signatures in this regard and wrote an open letter to President Abdul Hamid demanding the VC’s immediate removal.

This letter along with the collected signatures of the students will be emailed to the President today (Tuesday).

“We’ll wait for the President’s decision, but our protest will continue till then,” said Samiul Hasan Shafin, a protesting student.