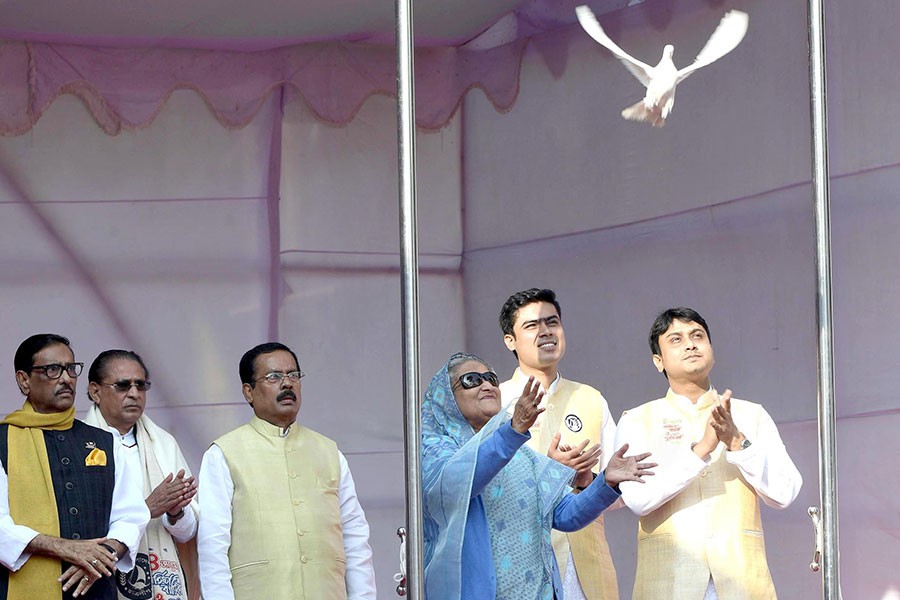 Prime Minister Sheikh Hasina has urged leaders and activists of Chhatra League to dignify their organisation through gaining confidence and trust of the countrymen.

Sheikh Hasina made the remarks while addressing a grand reunion of incumbent and former leaders of the BCL as the chief guest marking its 72nd founding anniversary at the historic Suhrawardy Udyan in Dhaka on Saturday afternoon.

The PM said Chhatra League leaders should keep in mind that their organisation played very important role in all of the democratic movements including the language movement, six-point demand and Liberation War.

Recalling the glorious role of the BCL in the country’s all past movements, Sheikh Hasina said the organisation, founded by Bangabandhu, made important contributions to help reach all struggles to their logical ends.

“If we prepare any list of the shaheeds (martyrs), then we will see names of Chhatra League leaders and activists who established the rights of the people by sacrificing their lives,” she said.

Sheikh Hasina paid rich tributes to the BCL leaders who sacrificed their lives for the cause of people’s welfare.

Rebutting their opinion in this regard, she posed a question: “Why Bangabandhu was in jail at that time.”

He (Bangabandhu) was in jail for organising the Language Movement, Sheikh Hasina said.

The historic March 7, 1971 speech of Bangabandhu is now internationally recognised while UNESCO is set to jointly celebrate the birth centenary of Father of the Nation Bangabandhu Sheikh Mujibur Rahman with the Bangladesh government.

The premier said Bangabandhu entrusted the Chhatra League leaders and workers with the task of taking to the people the “Joy Bangla” slogan, the 6-point and the 11-point demand and idea of the proposed flag of an independent Bangladesh.

Sheikh Hasina said the Chhatra League first protested the assassination of the Father of the Nation along with most of his family members on August 15, 1975 and first demanded the return of mine and Sheikh Rehana, who were not allowed to enter the country for six years after Bangabandhu’s murder.

The premier asked the BCL leaders and workers to follow the ideal and philosophy of Bangabandhu, saying, “The Father of the Nation never thought of his wellbeing, rather welfare of the people and the country as well.”

In this context, she recalled that Bangabandhu’s studentship at Dhaka University was stripped off as he denied to give muchleka (affidavit) for his involvement in establishing the rights of fourth class employees of Dhaka University.

Noting that honesty and ideal were the strength of Bangabandhu, she said, “Bangabandhu did everything for establishing what he believed true.”

The premier asked the BCL leaders and activists to read the two books written by Bangabandhu “Asamapta Atmajiboni” and “Karagarer Rojnamcha'”, saying, “If you want to be leaders, you should read these books to learn good politics.”

She also asked the BCL leaders to read the Pakistani intelligence report on Bangabandhu from which they could know the true history of Bangladesh and works of Bangabandhu.

The premier bitterly criticised late president Ziaur Rahman for giving arms and money to the brilliant students to use them as lathials (cadres) to continue the illegally grabbed state power following the footsteps of Ayub Khan. Later, Ershad and Khaleda Zia followed him (Ziaur Rahman), she added.

The premier described the year 2020 as very important for Bangladesh as the country is set to celebrate the birth centenary of the Father of the Nation from March 2020 and March 2021, which was declared as the “Mujib Borsha”. The countdown of the celebration will start from January 10 next as Bangabandhu returned the country on that day in 1971.

She said, “My only aim is to build Bangladesh a developed and prosperous country as dreamt by Bangabandhu.” she said.

Referring to interview of Bangabandhu with David Frost, Sheikh Hasina said, “In the interview, Bangabandhu said that he loved the countrymen most.”

“So I am working for the betterment of the people following the footsteps of the Father of the Nation” she added.

A documentary on the role BCL in all the democratic and progressive movements including the Liberation War of 1971 was screened on the occasion.

At the outset of the function, a minute’s silence was observed as a mark of respect to the memory of Father of the Nation Bangabandhu Sheikh Mujibur Rahman and late BCL leaders.