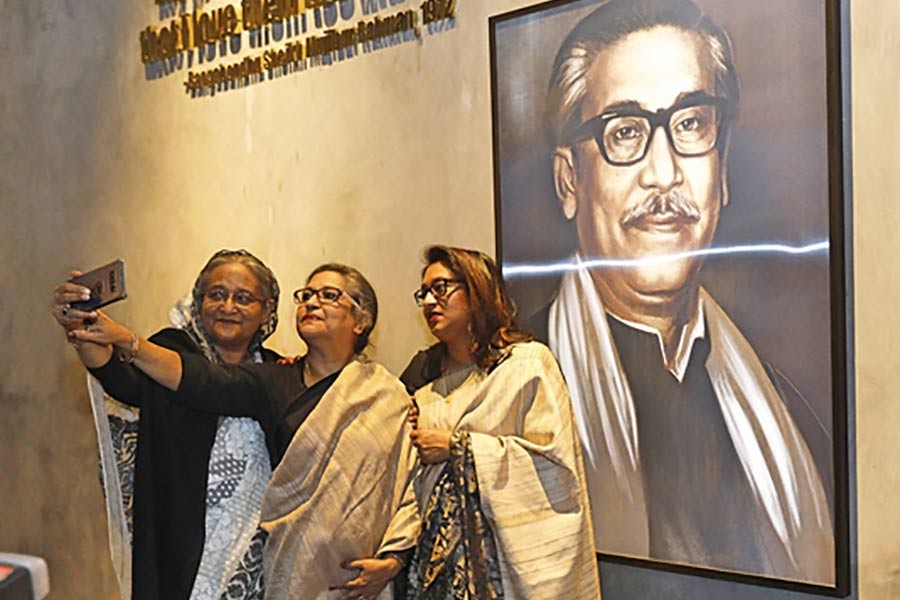 Prime Minister Sheikh Hasina has taken a selfie with her sister Sheikh Rehana and daughter Saima Wazed Putul standing in front of a portrait of Father of the Nation Bangabandhu Sheikh Mujibur Rahman.

They shared the light moment while a photo and painting exhibition titled “Lightning the Fire of Freedom Bangabandhu Sheikh Mujibur Rahman” at Bangladesh Shilpakala Academy in Segunbagicha in Dhaka on Friday night, reports BSS.

While visiting the exhibition at the National Art Gallery of the academy, the prime minister spoke about the photos and paintings of the exhibition.

She reminisced her participation in the movement against the then Pakistani rulers for banning Rabindra Sangeet when she saw a newspaper report on the movement displayed in the exhibition.

Sheikh Hasina said her mother Begum Fazilatunnesa Mujib did not allow her to go out of their house for some days when photos regarding her participation in the movement published in the newspapers.

The two daughters of Bangabandhu became very emotional and embraced each other after listening to the historic March 7 speech which was displayed in the exhibition.

Later, Sheikh Hasina and Sheikh Rehana visited other art works arranged by  Shilpakala Academy and also took a selfie in front of a portrait of Bangabandhu.

The Dhaka Art Summit was held at the Shilpakala Academy from February 7-15, and the special exhibition on Bangabandhu has been organised in the summit as part of the Mujib Borsho.

Though the summit ended, the exhibition will remain open for all till March 31, organisers said, adding the Centre for Research and Information (CRI) is extending support to the exhibition by providing information.