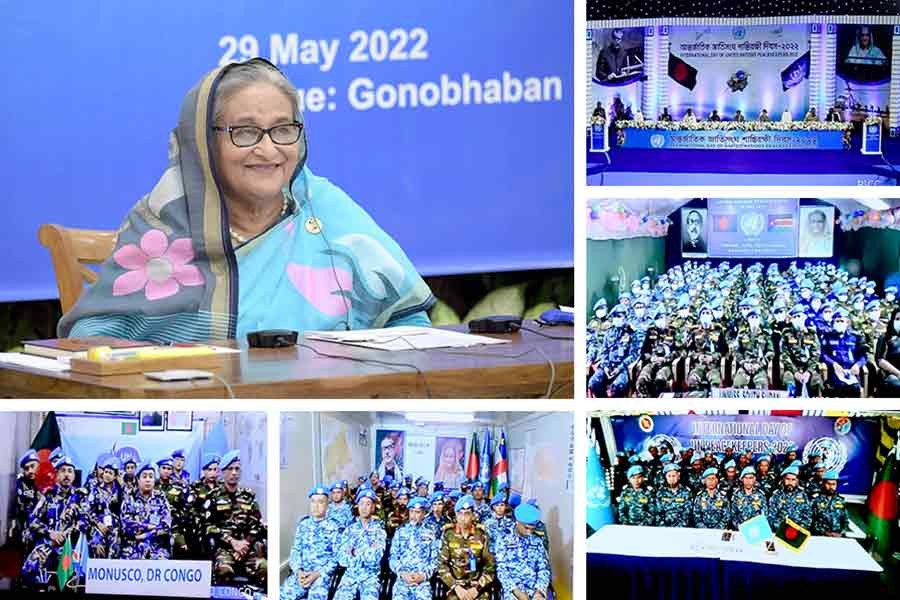 Prime Minister Sheikh Hasina has said as many as 6,825 peacekeepers from Bangladesh are currently working for the United Nations which is 9.2 per cent of the total number of peacekeepers.

As of now, the UN Peacekeeping Mission has 75,516 members from 121 countries working to uphold peace around the world.

In her virtual address at an event on International United Nations Peacekeepers Day 2022 on Sunday, Bangladesh is ready to send more peacekeepers to the UN, if needed, reports bdnews24.com.

She mentioned that currently, 519 women are working in the peacekeeping mission.

The prime minister said participation in the UN Peacekeeping Mission has strengthened Bangladesh’s position in the global effort to establish peace.

She said, “Also, it has played a significant role in strengthening the country’s diplomatic ties with those nations with strong military powers. The peacekeeping mission members are also earning a huge amount of foreign currency and contributing to the national economy.”

Hasina lauded the peacekeepers from Bangladesh, saying they perform social duties besides their regular duties of peacekeeping, and therefore, earned the trust of the people from all walks of life.

Sheikh Hasina urged Bangladeshi peacekeepers to show professionalism and sincerity while performing their duties across the world.

“We want the peacekeepers from the Bangladesh Army, Navy, Air Force and the Police Force to perform their duties with professionalism, honesty and sincerity. You must keep yourself safe and at the same work hard to brighten the image of the country,” she said.

She reminded the peacekeepers that confidence is a key factor in performing any duty and they would be successful if they felt confident while performing their duties.

Hasina highlighted the Ukraine war, saying it has left a significant impact on the global economy.

“We don’t want war, but peace. We want peace to prevail all across the world. I believe everyone will acknowledge and remember the work of all peacekeepers, including those from Bangladesh, to uphold global peace."

In the contemporary world, it is quite challenging to establish peace, she said. “With fast-spreading technology and progress, different nations’ and other evil forces are posing new threats. Therefore, the members of the UN Peacekeeping Mission are now facing complicated and multidimensional issues. To confront these new challenges, we have prepared our peacekeepers with proper training and equipment.”

Upholding this year’s theme of the International United Nations Peacekeepers Day- 'People Peace Progress: The power of partnerships' - Bangladesh will play a stronger role in establishing global peace, Hasina said. “I believe our young members of the Armed Forces and Police Force are ready to confront the challenge of establishing peace in the 21st century.”

Bangladesh always supports peace, said Sheikh Hasina. In 1999, Bangladesh proposed a ‘Culture of Peace’ bill to the UN which was passed unanimously. The UN acknowledges it every year since then, she said. The Peace Keeping Operation Training Centre was established in Bangladesh in 1999. Later, it became the Bangladesh Institute of Peace Support Operation Training in 2002 and has been working as one of the best training centres for peacekeepers in the world.