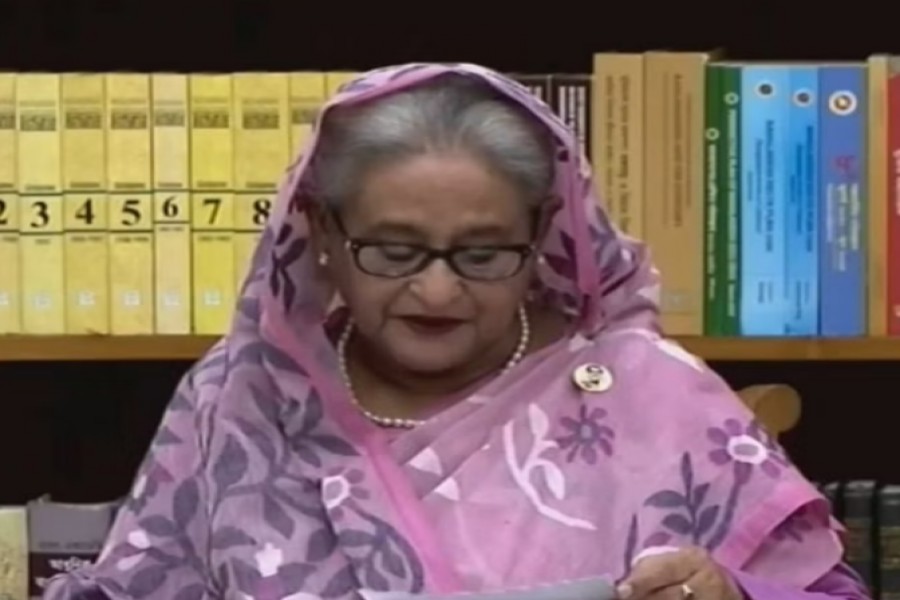 Prime Minister Sheikh Hasina says the world will face even more difficult times in 2023 and countries may face severe crises such as famines.

These discussions were part of her interactions with world leaders on the sidelines of the UN General Assembly, Hasina said at a media conference on Thursday, where she discussed her recent trip to the UK and US, reports bdnews24.com.

“Our country is already disaster-prone. On the one hand, we have to deal with natural disasters, and on the other, we have to face man-made ones,” she said.

She left Dhaka for London on Sept 15. There, the prime minister, accompanied by her sister, Sheikh Rehana, joined a host of other world leaders in paying their respects to Britain's longest-reigning monarch at Westminster Hall ahead of the state funeral.

Hasina said she wrote a condolence message in Bangla on behalf of the people of Bangladesh and her family at Lancaster Hall.

After attending the funeral at Westminister Abbey and the accession ceremony for King Charles III, she flew to New York on Sept 19.

At the UN headquarters in New York, the prime minister took part in nine high-level meetings and side events.

Hasina also attended a reception hosted by US President Joe Biden for the heads of state participating in the UNGA on Sept 21. The prime minister said she invited President Biden and First Lady Jill Biden to visit Bangladesh.

Hasina addressed the UNGA in Bangla on Sept 23. In her speech, the premier emphasised the economic fallout from the war in Ukraine for developing nations such as Bangladesh, particularly the effects of the measures and counter-measures taken by the warring sides in Europe and their allies.

The Bangladesh leader stressed the importance of mutual solidarity at a time when the world has barely shaken off the impact of the coronavirus pandemic. She called on the international community to resolve all crises and disputes through dialogue rather than imposing economic sanctions and counter-sanctions.

On Thursday, she urged the people of Bangladesh to give greater consideration to food security. “Whatever agricultural land or water bodies you own, make use of them.

Hasina also highlighted the importance of ensuring food security in the face of the current economic and environmental challenges.

She called on her countrymen to utilise every bit of arable land at their disposal. "Not a single inch of [fertile] land should go unused," she said while reiterating the need to practise austerity.

However, Hasina said Bangladesh’s economy was overcoming the twin crises of the pandemic and the Ukraine war and was able to keep going.

“I can assure you that Bangladesh faces no risks in the long term or medium term,” she said. “I believe and I can assure everyone that we will be able to achieve our targeted growth rate.”

There are no issues with the budget and the government is working swiftly to complete the most urgent projects, the prime minister said.