‘They are often disallowed to sit for recruitment tests. Even if they pass the written tests, they are not invited to face viva-voice’ 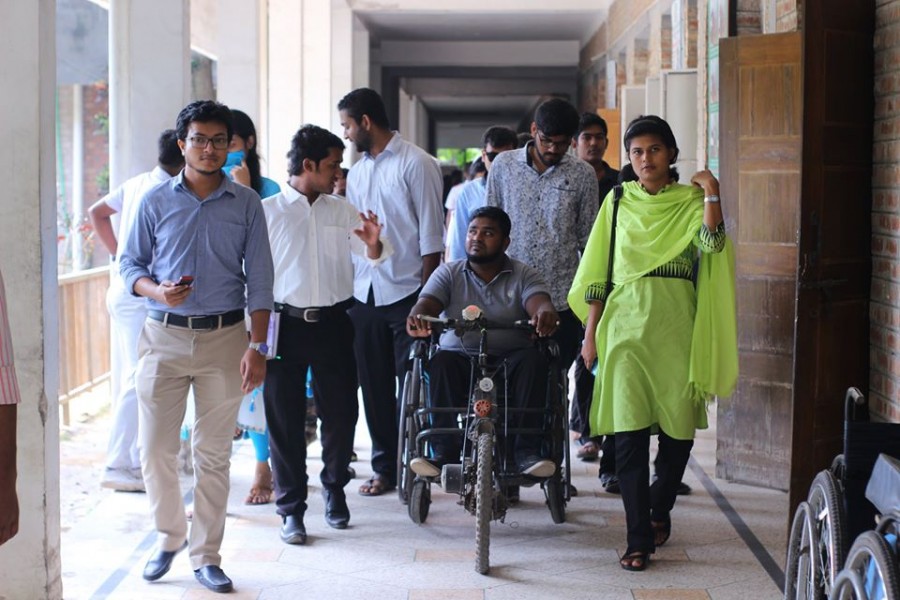 Participation of physically-challenged people in education and employment is still challenging in Bangladesh as they are facing ordeals and noncooperation in every step of availing their basic citizen rights.

They also face difficulties in receiving proper healthcare especially in the local areas across the country, observed rights activists, experts and persons with disability while speaking to the FE.

Besides, there is no detailed information with the government of how many handicapped people are there in the country.

Despite completing higher education, the physically-challenged people get a raw deal during recruitment tests for private and government jobs, Advocate Rejaul Karim Siddique who worked with Bangladesh Legal Aid and Services Trust as research specialist, told the FE.

"They are often disallowed to sit for recruitment tests. Even if they pass the written tests, they are not invited to face viva-voice. There are flaws and complexities in the existing disability welfare policy and we need to reshape it," added Mr Siddique, who himself is also a physically-challenged person.

Md Nazmus Sakib, operational team lead at Physically-challenged Development Foundation (PDF), told the FE that some leading higher educational institutions including public universities are not friendly enough to persons with disabilities because of their old infrastructures.

He also advocated changes in people's mindset, especially of the top government office bearers, to create a friendly environment for handicapped people in educational institutions and workplaces.

Joshiah Sangma Chibol, who himself is a person with disability and also executive member of Dhaka University Central Students' Union (DUCSU), giving an account of his struggling life said most schools do not have special care facilities for special children (physically challenged), and a school with such special facilities are highly expensive.

He, abnormal in height, described his straggle and ordeals of getting education and other basic rights as a citizen since his childhood to university.

"We have brought some changes including ramps for wheelchair users in some administrative and academic buildings, special facilities in washrooms at DU halls, and mostly can successfully hit the mindset of those who think we (persons with disability) are incapable of holding positions", he continued.

Experts opined that over 60 per cent physically-challenged students could continue their study with normal students while the rest need especial care.

Khandaker Jahurul Alam, executive director of Centre for Services and Information on Disability (CSID), told the FE that the social welfare ministry is working to support persons with disability, but in true words Bangladesh is lagging far behind the global standard in it.

He questioned the capacity of the ministry to help persons with disability to join mainstream.

He observed citing a study of his organisation that at least 30 ministries are required to work in collaboration to support persons with disability accordingly.

And, a joint move of the education and health ministries is also needed instead of highly depending on the social welfare ministry.

He, however, said the ICT ministry could became a positive example for other government agencies as to how create job opportunities and employment for the handicapped people.

All the experts and rights bodies expressed worry as there is complexity in the requirement for government jobs for physically challenged people after the abolishment of quota system.

Md Ismail, additional secretary of the social welfare ministry, in response to the question about the government data said the government is working under a programme to collect detailed information of how many people in the country are physically-challenged.

"And we don't have adequate skilled manpower and healthcare facilities especially in the rural areas to support them (persons with disabilities) with special education and healthcare," he admitted.

"We are also working to bring reform in the appointment rules to raise the number of physically-challenged people in government jobs, for which a paper has been sent through the public administration ministry to the Public Service Commission for next course of action," he added.

He, however, echoed that the current scenario of physically challenged people in Bangladesh is not satisfactory yet.

Bangladesh Bureau of Statistics data shows some 9.07 per cent of the total population in Bangladesh is somehow carrying signs of disabilities, and the UN use the data for Bangladesh.

Besides, 15.07 per cent of the total population of the globe carry signs of disabilities.