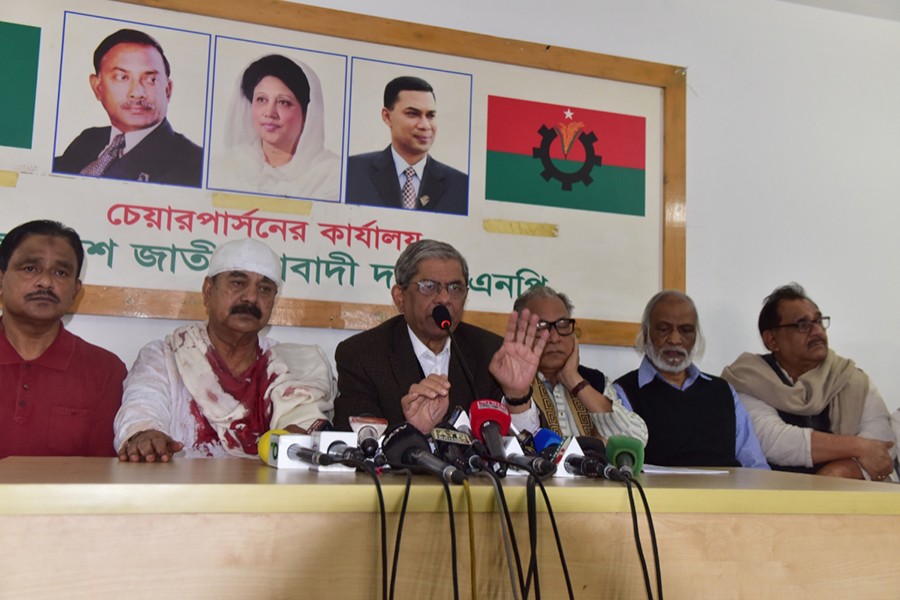 The Jatiya Oikya Front late on Tuesday demanded immediate resignation of Chief Election Commissioner KM Nurul Huda and urged the President to replace him with a neutral person.

"This shameless, incompetent, and dysfunctional Election Commission has to be accountable to people for its failure to create an election atmosphere in the country. We demand the Chief Election Commissioner to quit immediately. Or else, no minimum level of election atmosphere will be created," said Oikya Front spokesman Mirza Fakhrul Islam Alamgir.

Speaking at a press conference after a meeting of the alliance leaders at BNP chairperson's Gulshan office, he said their alliance thinks the EC has to be freed from the leadership of a 'spineless and biased' person like Nurul Huda to ensure a free, fair, and neutral election, reports UNB.

"We demand the President to appoint a non-partisan and impartial person as the Chief Election Commissioner instantly."

Hours after they walked out of a meeting with the CEC, the alliance came up with the demand.

Jatiya Oikya Front leaders, led by Dr Kamal Hossain, walked out of a meeting with the Election Commission on Tuesday afternoon, led by Nurul Huda, as they found the Commission's attitude 'biased and impolite' one.

About Oikya Front delegation's meeting with the CEC, Fakhrul said their leaders got not only disappointed but also stunned as Nurul Huda ignored their logical allegations and talked like a ruling party leader showing his 'biased and indecorous' attitude.

"It seems to us incredible the illogical and irresponsible comments by the chief of a constitutional body like the Election Commission. It has clearly exposed that the CEC is nothing but a very loyal employee of the government. There's no possibility to get neutral attitude from him, let alone a fair and impartial election," he said.

He said the way opposition leaders and activists are being attacked in every constituency it cannot be called an election. "Even, women aren't spared."

He urged the Election Commission to look into the incident and take action against those responsible for it.

Fakhrul said their alliance considers the December-30 election as a battle for democracy.

"When we've scarified blood, we'll give more, if necessary, to win the battle and free our leader Khaleda Zia."