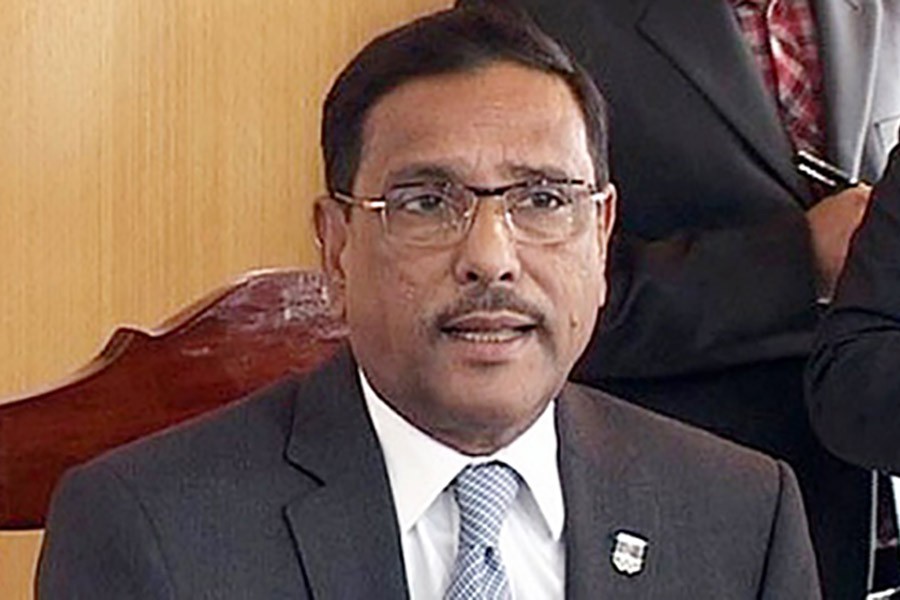 Awami League general secretary Obaidul Quader has accused the BNP of making falsehood and misleading statements over the election commission (EC) and the search committee aiming to create confusion among people.

“BNP secretary general Mirza Fakhrul Islam Alamgir is constantly making falsehood and delivering misleading statements over the EC and the Search Committee aiming to create confusion among the people. But we all know that the EC holds elections,” he said in a statement.

Quader, also the road transport and bridges minister, said following the country’s Constitution and the existing law, the EC holds elections while administration and the law enforcement agencies work under the Commission during the polls, reports BSS.

Mentioning that any political party or the government does not administrate any polls, he said the government conducts only the routine works during the general elections.

The AL general secretary said the incumbent government, led by Prime Minister Sheikh Hasina, is committed to upholding the democratic system of the country.

So, he said, the government never influenced the EC in holding elections in the past and it will not do this in the future.

“The government always cooperates with the EC in performing its responsibilities,” he added.

Quader said the country’s people observed how the BNP misused and influenced the EC during its regime to sustain its power.

He said the party was involved in unprecedented vote-rigging in Magura and Mirpur by-elections aiming to sustain its power.

The BNP held a voter-less election on February 15 in 1996 to assume the state power in an undemocratic way, which was recognised as a ‘black chapter’ in the history of Bangladesh’s democracy, the road transport minister said.

Noting that since its birth, the BNP has been standing against the democracy, he said BNP founder and military dictator Ziaur Rahman captured the state power illegally and unconstitutionally, violating the country’s democratic values and the spirit of Liberation War through the killing of Father of the Nation Bangabandhu Sheikh Mujibur Rahman.

That is why the BNP, a follower of the policy of militarism, has no interest in the EC and the Search Committee, Quader said.

He said by grabbing power through killing, coup and conspiracy, dictator Ziaur Rahman established the BNP under the military outposts.

When the BNP came to power, every time it carried out steamroller of oppression on the opposition parties and the minorities as well, Quader said.

He said overcoming this horrible time, Bangladesh that once was a sanctuary of terrorism and militancy turned into a peaceful state under the leadership of Prime Minister Sheikh Hasina.

When an anti-state political force is continuously getting involved in anti-democratic deeds, it is very hard to uphold the democratic system of the country, the AL general secretary said.

But, he said, the trend of democracy will continue in the country under the leadership of Prime Minister Sheikh Hasina, resisting all the plots of anti-liberation forces and their allies.