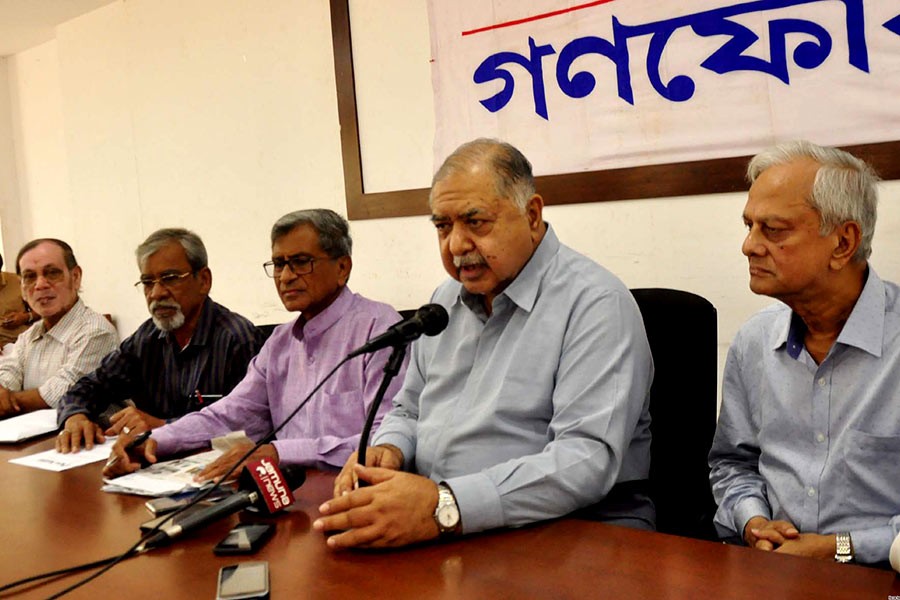 Gano Forum President Dr Kamal Hossain has said his party will not join in any greater national unity if Bangladesh Jamaat-e-Islami remains with it.

He came up with the announcement at a press conference at the Jatiya Press Club on Tuesday, reports UNB.

Asked whether they will go for forging the national unity with BNP keeping Jamaat with it, Dr Kamal said, "I and our party won't do it, but I don't know what other parties will do."

"So far, as I know, Jamaat is no longer political a party as its registration (with the Election Commission) was cancelled," he added.

Mentioning that he did not go with Jamaat in his entire life, Dr Kamal said he would not budge from his position at this last stage of his life.

He, however, said there is a progress in the initiative for forging a greater unity to ensure a free, fair and inclusive national election in the country.

Replying to a question who will lead the alliance if there is a greater unity, Kamal said he believes in joint leadership, not an individual's leadership.

The Gano Forum chief said they have got permission for holding a public rally at Gulistan's Mohanagar Natya Mancha on September 22 as part of their efforts to forge the national unity.

About the shifting of the makeshift court to Old Dhaka Central Jail from Alia Madrasah ground to hold trial in Zia Charitable Trust graft case, he said the decision was not taken as per the Constitution. "I think, they (BNP) will challenge the decision, and the court will judge it. If I go to the court, I'll say it's not constitutional."

Dr Kamal, also a noted jurist, said holding the trial of an 'opposition leader' in jail is not the right action.

About the ruling party leaders' remarks on holding the trial of Col Taher in jail, he said it was held during the military rule 41 years back. "It's not logical to shift the court to jail citing such an instance. I think, the constitution has been violated with it." About BNP's demand for Khaleda's treatment in any specialised hospital, the Supreme Court senior lawyer said there is a long tradition of allowing sick prisoners receiving treatment in any hospital.

Mentioning that he has heard Khaleda Zia's health condition deteriorated, he said a sick person should not suffer this way. "The government shouldn't forget we live in a civilised society."

Voicing his deep concern over the 'wholesale' arrest of people by plainclothes police, Dr Kamal alleged that the government is not running the country as per the constitutional rule.

"Power must be exercised following the rules and abiding by the Constitution. We're now worried we're going beyond the constitutional rule," Kamal said.

He urged that the government to remain alert so that people are not harassed unlawfully and the law enforcers do not abuse power.

The Gano Forum president criticised the government for arresting and taking on remand those students who waged movements for quota reform and safe roads.

Referring to the arrest of several hundred BNP leaders and activists from their Monday's human-chain programme, he said the government should refrain from such acts to ensure a normal situation in the country ahead of the general election.