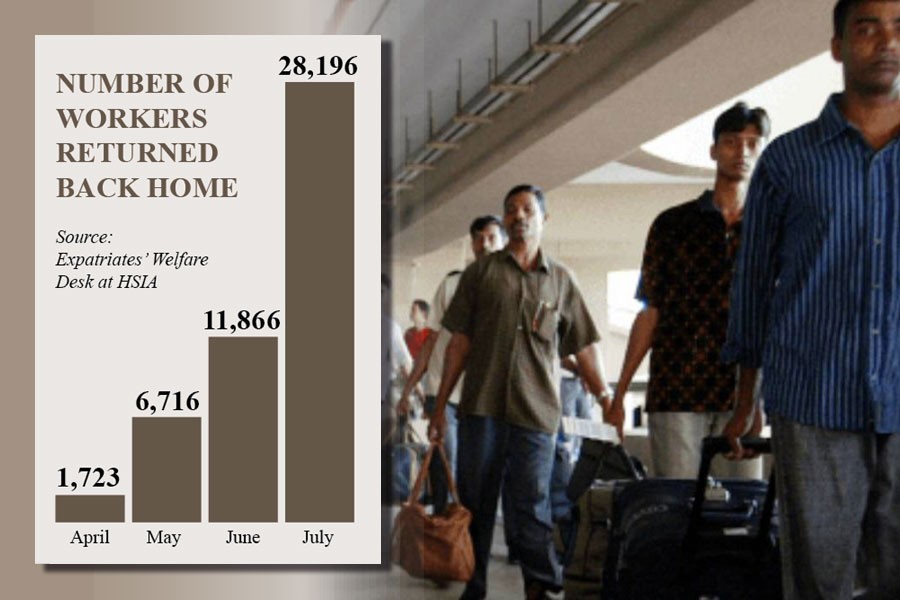 Nearly 50,000 workers returned back home from different countries in the last four months by specially-arranged flights of the government, according to data of Expatriates’ Welfare Desk at Hazrat Shahjalal International Airport.

The workers returned from abroad due to various reasons; such as job cut, irregular status while many of them are jail returnees; officials at the desk said.

However, migrant rights activists said maximum of the workers returned empty-handed. So, they are now facing economic hardship.

They suggested providing financial support for their sustainable reintegration.

Most of the workers returned from, United Arab Emirates, Maldives, Kuwait,  Qatar ,Oman, Bahrain and Singapore.

Officials said the arrival of migrant workers is still continuing.

But now workers are arriving through transit flights. So, they could not collect August figure of returned workers,” said Fakhrul Alam, assistant director at the welfare desk.

Women workers are more vulnerable in condition. In this situation the government should take an effective reintegration plan.

It should be made easy the access of loans by Probashi Kallyan Bank to the returned workers, she observed.

A recent study, conducted by Refugee and Migratory Movements Research Unit (RMMRU), showed that a majority 74 per cent of returnee migrant workers failed to bring remittances home from their job destination countries.

About 74 per cent of returned workers had left behind a significant amount of remittances in destination countries while returned. On average the affected migrants lost Tk 175,000 (minimum Tk 9500 and maximum Tk 500,000), the study showed.

Workers will get Tk 100,000 to Tk 500,000 each based on their project proposals of income-generating activities. The rate of interest of the loan has been fixed 4.0-per cent.

The government has also taken a move to ensure humanitarian aid to migrant workers and their families, impacted by Covid-19 pandemic.

About 12 million Bangladeshis went abroad with jobs since 1976.