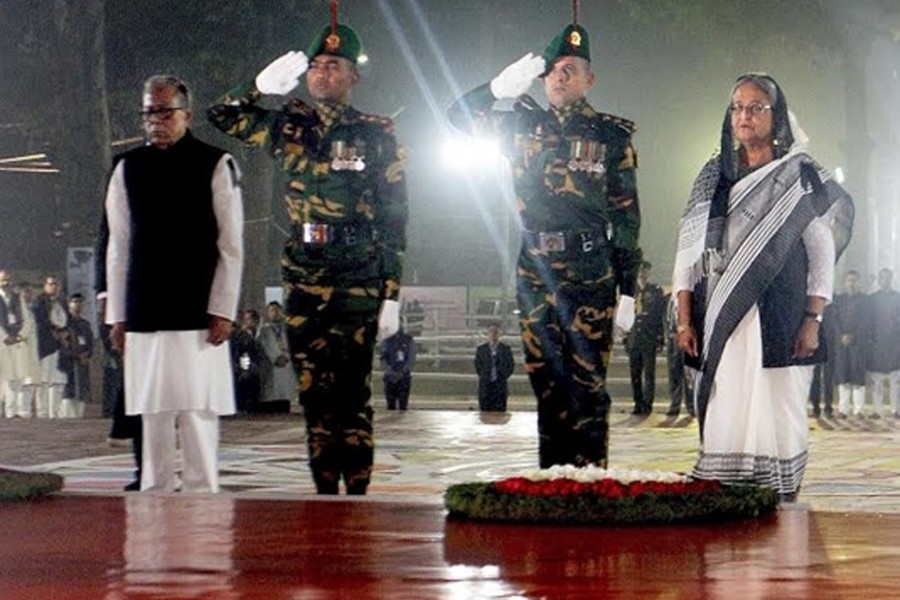 The nation is paying rich tributes to the martyrs of the 1952 historic Language Movement with the clock striking 00.01am on Thursday, marking 'Amar Ekushey', the Language Martyrs’ Day and International Mother Language Day.

The great Language Movement, a significant event in the nation’s history, was aimed at establishing the right of the mother tongue as well as protecting self-entity, and culture and heritage.

President Abdul Hamid and Prime Minister Sheikh Hasina led the nation in paying the homage by placing wreaths at the Central Shaheed Minar at one minute past midnight.

The President and the Prime Minister proceeded to the altar of the Central Shaheed Minar together in slow pace as the immortal song on Amar Ekushey—'Amar bhaiyer rakte rangano Ekushey February’— was playing.

They stood in solemn silence for some time as a mark of profound respect to the memories of the language heroes.

Ministers, advisers to the Prime Minister, MPs, the chiefs of three services, diplomats, senior Awami League leaders, and high civil and military officials were present on the occasion.

On his arrival at the Shaheed Minar, the President was received by Prime Minister Sheikh Hasina and Vice-chancellor of Dhaka University Prof Dr Md Akhtaruzzaman.

Speaker Dr Shirin Sharmin Chaudhury paid tributes to the martyrs by placing a wreath at the Shaheed Minar.

Flanked by Cabinet members and senior leaders of the party, Sheikh Hasina, also the President of Awami League, later placed another wreath at the Shaheed Minar on behalf of the party.

Walking barefoot to the Central Shaheed Minar with wreaths and flowers singing 'Amar bhaiyer rakte rangano Ekushey February', people will pay their tributes throughout the day to the heroes of the Language Movement who laid down their lives for achieving the recognition of Bangla as the state language of erstwhile Pakistan.

Different political parties, their front organisations as well as socio-cultural organisations have taken various programmes to pay their homage to the language martyrs all day long.

BNP leaders and activists will gather in front of Balaka Cinema Hall at Nilkhet at 6:00 am wearing black badges. Later, they will first offer fateha at the graves of Language Movement martyrs at Azimpur Graveyard and then go to the Central Shaheed Minar to pay tributes to the martyrs.

On February 21, 1952, students and the common people in Dhaka took to the streets in protest against the then Pakistani government's denial of Bangla as the national language and imposition of Urdu as the only official language of Pakistan.

Salam, Barkat, Rafiq, Jabbar and a few other brave sons of the soil were killed in police firings on this day in 1952, when students came out in a procession from the Dhaka University campus breaching section 144 to press home their demand for the recognition of Bangla as a state language of then Pakistan.

Being a source of ceaseless inspiration, Amar Ekushey inspired and encouraged the nation to a great extent to achieve the right to self-determination and struggle for freedom and the Liberation War.

With the bloodshed passage of Language Movement, the nation got the recognition of Bangla its mother tongue and attained its long-cherished independence under the charismatic leadership of Father of the Nation Bangabandhu Sheikh Mujibur Rahman in 1971.

In his message, the President said, “I extend my warm congratulations and sincere felicitations to all multilingual people of the world along with Bangla-speaking people.”

He recalled with deep reverence the language martyrs namely Shaheed Salam, Barkat, Rafiq, Jabbar, Shafiur and so many unknown and unsung language heroes who laid down their lives for the cause of mother tongue, according to UNB news agency.

The President expressed the expectation that the spirit of Amar Ekushey would be the source of incessant inspiration for the protection of own languages and culture of people. “On the occasion, let the bond of friendship among multilingual people be strengthened, world’s almost defunct languages be revived and the globe be diversified in respective societies.”

The Prime Minister, in her message, said the greatest Ekushey is the symbol of grief, strength and glory in the life of every Bangali.

“I pay my deep homage to the memories of the martyrs. I also pay my deep respect to the greatest Bangali of all time, Father of the Nation Bangabandhu Sheikh Mujibur Rahman who had led the language movement and all other language veterans,” she said.

“Let’s build a hunger-poverty-free and happy-prosperous Sonar Bangladesh as dreamt by the Father of the Nation being imbued with the spirit of the great Ekushey,” the Prime Minister added.