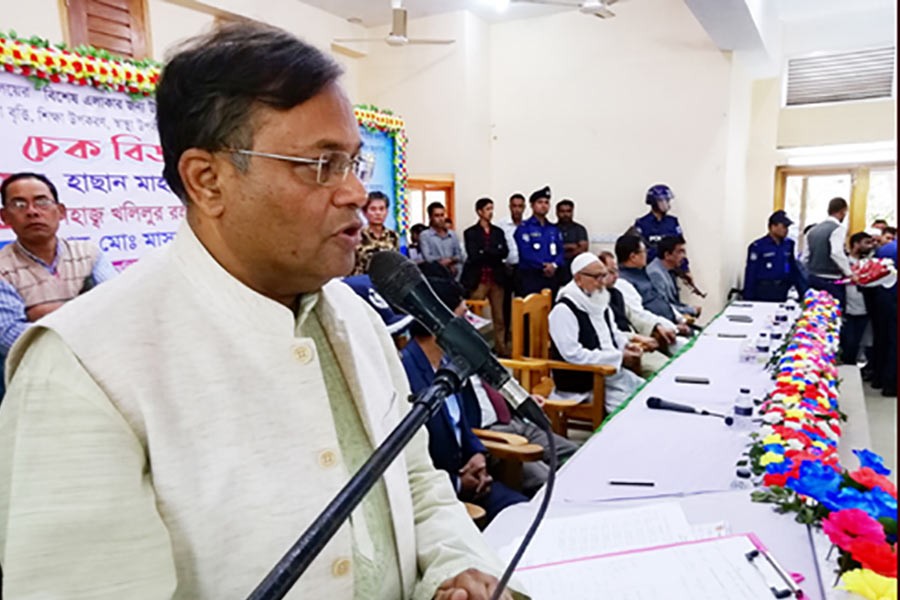 Information Minister Dr Hasan Mahmud has described the ruling of the International Court of Justice (ICJ) on the Rohingya issue as historic one, saying that Myanmar must abide by this ruling of the UN top court.

“I think that the countries which were confused about Myanmar’s atrocities on Rohingyas and its crimes against humanity, they (countries) will put pressure on Myanmar from now after the ICJ ruling,” he said.

The minister came up with the observation while speaking at a programme in Chattogram on Saturday. He distributed cheques among the distressed cancer patients and different equipments among ethnic groups under the Development Assistance for

Special Area of the Prime Minister’s Office at Upazila Parishad auditorium in Rangunia of the district.

Dr Hasan Mahmud, also Awami League joint general secretary, said all the judges handed down the ruling unanimously and as per the ruling, Myanmar will have to submit a ‘Compliance Report’ on its implementation of the orders in four months, and then every six months afterwards.

He hoped that the countries, which did not put pressure on Myanmar for taking back the Rohingyas from Bangladesh, will now put pressure on it to do so by awarding them full citizenship right. The Myanmar authorities must take necessary steps after the ICJ’s orders, he added.

The minister said Prime Minister Sheikh Hasina, the mother of humanity, opened the border for Rohingyas as they were persecuted in their own country- Myanmar. About 1.1 million Rohingya people took shelter in Bangladesh due to the atrocity by Myanmar authorities, he added.

Dr Hasan Mahmud said Gambia lodged a case on behalf of the Organisation of Islamic Cooperation (OIC) with the UN top court-ICJ and the court gave a historic ruling in favour of humanity.

“The ICJ’s ruling is a huge development in regard to protecting the rights of Rohingyas. It is a good instruction in favour of humanity,” said Dr Hasan.

He said the ICJ at the Hague granted a series of emergency steps requested by the mainly Muslim African state of The Gambia.

The minister said the court has ordered that Myanmar will never break the ‘Genocide Convention’, Myanmar army or any other armed groups will not engage in massacres or similar acts in any way, the evidence of all the genocide and destruction that took place earlier should be preserved and after the next four months, a ‘Compliance Report’ should be submitted for the execution of the court order.

Hasan hoped that Myanmar will stop such kind of atrocities and take back around 1.1 million forcefully displaced Rohingyas through giving full citizenship right.

Later, the minister distributed scholarships among the students of ethnic groups.