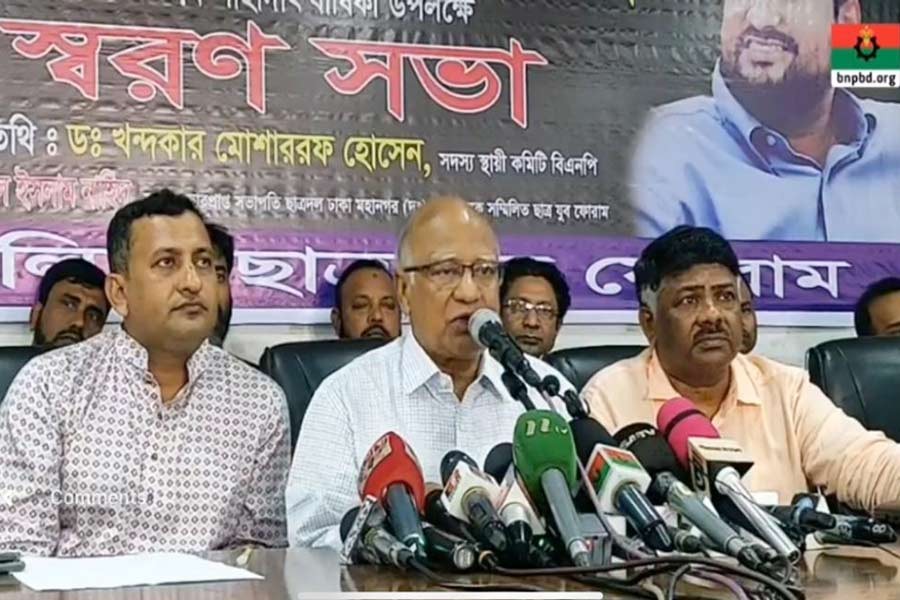 BNP senior leader Khandaker Mosharraf Hossain on Saturday said their party will not participate in any dialogue with the current Election Commission (EC).

"Our position is clear that there is no reason for BNP to take part in any talks with the Election Commission. It matters little whether the commission holds dialogue or not,” he said.

Speaking at a discussion, the BNP leader also said their party thinks the current Election Commission’s dialogue has no value.  “So, there is no question of talking to them (EC).”

Mosharraf, a BNP standing committee member, came up with the remarks a day after Chief Election Commissioner Kazi Habibul Awal’s comment that BNP would be invited to the dialogue soon, reports UNB.

Reiterating their party’s stance on the next election, Mosharraf said BNP will not join any election under the current Awami League government.

He said BNP did not take part in the 'dramas' staged by the President and a search committee when the government formed the current EC. “We don’t recognise in any way those are now there in the commission."

"The election that we want must be held under a non-party neutral government after the fall or resignation of Sheikh Hasina and the dissolution of parliament,” the BNP leader said.

Once a non-partisan government takes charge of the country, he said it will form an impartial and acceptable EC to conduct the election fairly and credibly. “Then we’ll talk to that Election Commission.”

Mosharraf said Awami League resorted to various tactics in the past centring on the national elections. "I want to make it clear that BNP and people will no longer fall into the trap of the ruling party.”

He called upon the country’s people to take all-out preparations to wage a street movement to bring a change in the government.

The BNP leader said the current government is not in a good mood as it has no control over anything.

"The ruling party leaders can’t sleep well...Bangladesh is in a much worse situation than Sri Lanka economically, politically and socially."