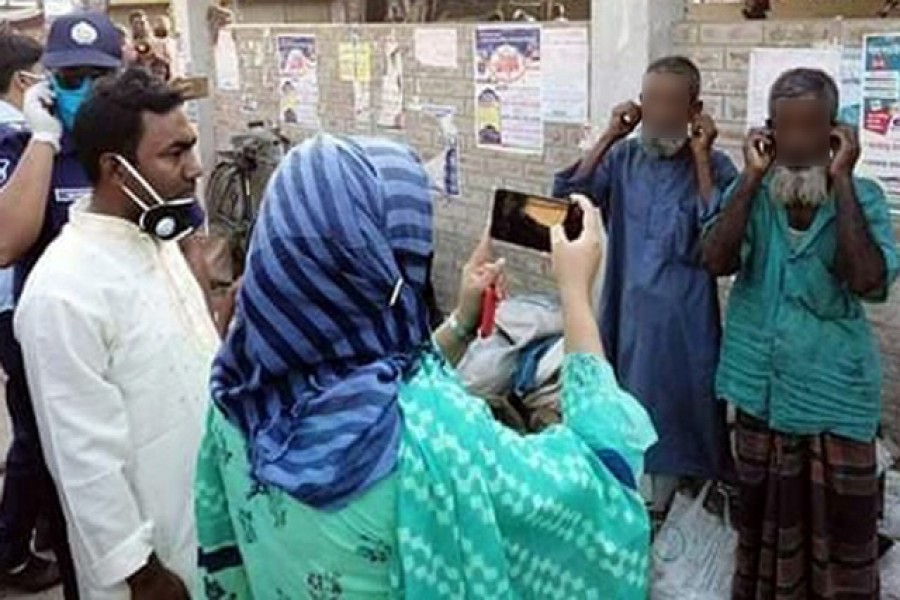 Moniranpur assistant commissioner, or AC, (land) Sayeema recording on her mobile phone two elderly men pulling their ears in a form of punishment handed down by her for their failure to wear masks during the coronavirus outbreak. — Photo Collected

The authorities have suspended assistant commissioner, or AC, (land) Sayeema Hasan for her “rogue behaviour” with two local elderly men in Monirampur Upazila in Jashore during the countrywide shutdown.

“As per the directive from the authorities, the official has been withdrawn from Manirampur. A committee is being set up to investigate the issue,” Jashore deputy commissioner Mohammad Shafiul Arif was quoted as saying by bdnews24.com on Saturday.

Sayeema was seen forcing the two men in Monirampur to pull their ears in a form of punishment for failing to wear masks during the coronavirus outbreak. She was also seen recording the episode on her mobile phone.

The photograph of the incident went viral on Facebook, drawing severe criticism from netizens with many demanding Sayeema be brought to book for her actions.

The government subsequently suspended Sayeema and posted her to the Jashore deputy commissioner’s office.

The government has closed down its offices across the country and urged everyone to remain at home barring an emergency in a bid to limit the spread of the novel coronavirus.

The local administration is working with the army to ensure that everyone complies with the directive.

US provides more medical supplies to BD to fight coronavirus